Warning: These forecasts are associated with very long range timeframes. This has a chance of not verifying at all, so use EXTREME CAUTION with this forecast.
The 12z FIM, which has been showing a tropical system developing in the Caribbean for the last 3+ days, is now showing the same system hitting Florida, and again in South Carolina in late May. Let's take a look.


As seen above, a tropical system appears poised to crash onto Florida shores, which may very well affect big cities like Orlando. Wind speeds indicate that this system would be of tropical storm status. I am very concerned about this situation. However, considering this is the first time the model is showing this scenario has me a little less convinced that it will happen (which is pretty low to begin with).


As seen above, the system is then directed to make a second, weaker landfall in South Carolina. Wind speeds tell me that the system would be borderline-tropical storm status, unsurprising after the Florida landfall. Now, this model does appear to have the right idea with landfalling in South Carolina, with a steady windstream going to the west off of Africa. This west flow is then diverted against the tropical system, pushing it onshore.

Considering that the Atlantic is prepping for this hurricane season, this is not entirely out of the question, especially since this scenario has been trending on this model for at least 3 days.

Invest 90 in the East Pacific has a 40% chance of development, as satellite imagery indicates a cluster of enhanced thunderstorms, with high clouds that appear to be making a swirling motion that may indicate rotation in the system. Should this happen, I would not be surprised to see this system really ramp up. 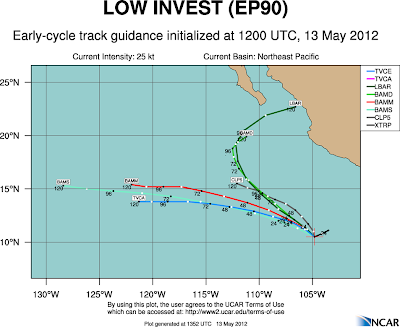 The track for Invest 90 looks to be split in 2 directions. The first one involves a potential landfall in Mexico, while the 2nd track, with more models, involves going out to sea with the system. Seeing as many storm systems in this position have gone out to sea in the past, this may be the solution for this system. 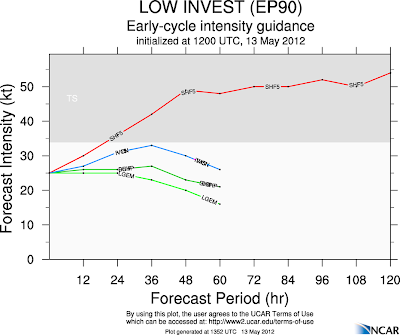 Intensity forecasts differ to soem degree, with only one model projecting tropical storm status winds. The short range models are pretty confident in a stagnant wind speed (maybe a slight uptick) over the next day and a half, with a drop off beyond that period.

The Tropical Cyclone Track Probability from Florida State University is projecting that Mexico has a 5% chance of a landfall from this system in 4 days. Mexico also has a 1% chance for landfall from the same system at hurricane status (Category 1 or 2). Hawaii has a measly 1% chance of landfall at any intensity.

Atlantic Invest 92 remains in the far eastern Atlantic. Chances of development have been downgraded to 20%, and clouds appear to be dispersing. However, rotation is evident in the remaining clouds, so if storms should reform, this may become a stronger system. 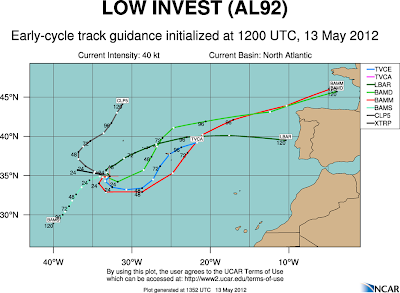 Latest tracks of the system include the system actually going towards Europe and the Azores, with Portugal and Spain at risk off the LBAR model. The tracks have yet to form a consensus, but there is concern at this time for that potential situation. 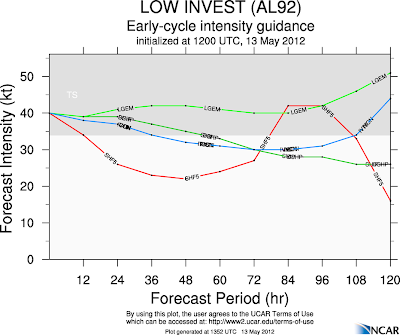 Intensity forecasts do show that this storm does have winds that classify it as a tropical storm. However, essential pieces are unavailable, thus the NHC's hesitation to call it a subtropical system. It does indicate that it isn't even a tropical low anymore.