Pre-Reading Notes: This is not a briefing, but an image forecast.
All speeds are in knots. Click here for a knot to mph converter.

By Andrew at 9:52 AM No comments: Links to this post

Email ThisBlogThis!Share to TwitterShare to FacebookShare to Pinterest
Related: Place to Be

The GFS continues to show the potential for snowflakes to fly in New York, Pennsylvania this Saturday as a cold blast shoots into the NE. In terms of snowfall accumulation, there will be potential for small amounts to accumulate in portions of the areas at risk for snow. Below is the 6z forecast 120 hour snowfall from the GFS for the areas in question. 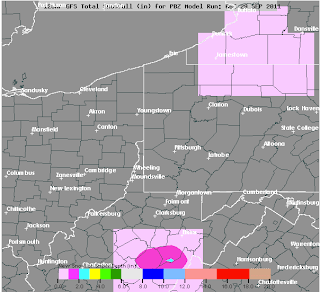 The largest amount possible will probably be 2 inches, but that will quickly melt if it even falls.  We will continue to watch this unfold, and provide constant updates if needed.
By Andrew at 9:34 AM No comments: Links to this post

'Windy City' Chicago to live up to its name today

The Windy City will get a lot windier over the next several hours as a cold front will drop from Minnesota through Chicago, IL. After it does, sharp winds will batter Chicago, Milwaukee WI, Madison WI, Gary IN all at once. The image we have put above is of projected surface wind gusts (which appear very plausible to me at this point in time). Chicago is forecast to have its sustained winds at 25 MPH for 17 hours. It is possible that many areas could see widespread minor damage, such as small limbs of trees down, or possibly the occasional roof shingle. As stated before, sustained winds are expected to be in the 20's for a while. Here's the projected sustained wind speed for the same time frame as the image above.

It appears only areas close to the lakes (i.e. Chicago) will get the very windy sustained conditions. That doesn't spare the more inland areas from wind gusts up to 40 knots, which is actually 54 MPH.. It appears widespread areas of 40-45 MPH winds are possible as referenced in the first image.
We will keep you up to date on the unfolding situation, and will be back in a couple hours with the new 12z model run.
By Andrew at 8:52 AM No comments: Links to this post

Using our specialized radar system, we have identified storm totals for last night's training severe thunderstorms. Training means one after another, so it is like a train. A very long train. Training storms are very prone to cause flooding, and are my choice for the best type of storm able to produce flash flooding.
Anyway, we checked two radar sites that are within the hardest hit area's range. The hardest hit area was Maringouin, LA. However, the input from the two different radar sites differed. We ended up deciding to show the one that seemed the closest to the radar itself, which would be where the most accurate information would be. 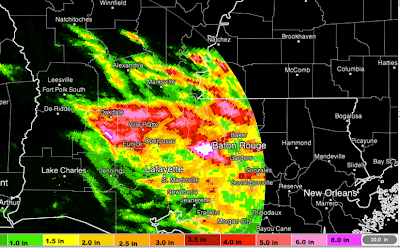 We have labeled them for your convenience. So this is from a radar centered in the Lake Charles, LA area. The the other radar site that we looked at was a bit to the northwest of New Orleans. The tricky thing is that this radar had an entirely different scale. Keep in mind the exact same scenario was occurring within these two NWS Offices that run the radars. The specialized radar system The Weather Centre uses collects raw data from the radar- direct from the source, so to say. Because there is no flash flood warning (or flood warning for that matter), we don't know what happened to the 6-10 inches of rainfall. (6 inches was the maximum total estimated for the other radar site.) There was a flaw flood warning at one point. Maybe the radars had an accident (highly unlikely since two separate radars both estimated more than 5 inches of rain fell). We may never know as there appear to be no visible spotter reports.
By Andrew at 8:44 AM No comments: Links to this post