Many in the weather world are asking or being asked if Sandy will turn out to be a repeat of the 1991 Perfect Storm that brought chaos to the entire Northeast. Let's see what similarities they have.

SIMILARITY: Both events involve merging storms.
Both the 1991 Perfect Storm and Hurricane Sandy will/did involve the merging of storm systems. Sandy looks like it will merge with a system that is currently bringing cold air to the Midwest and Plains. This merging will bring Sandy inland.

DIFFERENCE: The number of merging storms is different.
Sandy will merge with one other system. The 1991 Perfect Storm managed to hoard two other systems for itself. In other words, Sandy will have less energy to deal with.

SIMILARITY: Both occurred in October.
As eerie as this is, yes, both Grace and Sandy are/were active in late October. What makes this story even eerier is how Sandy should make its landfall on the Northeast on October 30- the same day in 1991 that Grace was absorbed by another system, when the Perfect Storm technically began.

In short, Sandy and Grace were entirely different, and will end up entirely different. While both tropical and post-tropical systems have their similarities, there's a reason why it was named the Perfect Storm- because it almost never happens. Sandy will be a close rival to the Perfect Storm's make-up, but effects and overall composure of the two are pretty far apart.

Hurricane Sandy is currently a Category 2 hurricane that is located to the east of Florida at this hour. Satellite imagery indicates that Sandy is a very large storm with a very packed center. However, the southern flank of the system is fairly dry, and I would want to see more enhanced convection in that area to make sure the system sustains itself.

The National Hurricane Center, or NHC, has Sandy moving on a wobbly north track with an eventual curve to the northeast. However, as Sandy moves up the coast, a disturbance located in the eastern North America will drag the system in, causing the two to merge. Because of this merge, Sandy will be directed to the northwest and retrograde (storms moving west in the Northern Hemisphere) into the East Coast, making landfall as a post tropical system. 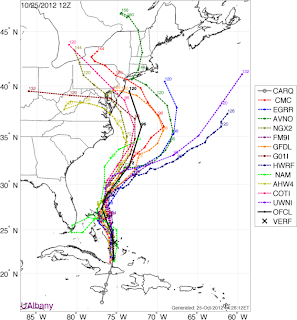 Models remain fairly confused with this system, although there is a general consensus for Sandy to move in the direction that the National Hurricane Center has Sandy going. There is potential for post-tropical cyclone Tony to grab Sandy and pull her out to sea, but I don't think this will happen and therefore prefer to side with the model guidance of a landfall on the East Coast. Due to the spread in the models when the system makes landfall, things are still a bit unsure as far as who could get snow and who could get the worst winds, but I have put out my best guess at the end of this post.

Rainfall will be a big concern with this system. The Hydrometeorological Prediction Center, or HPC, is indicating that many areas along the East Coast could get a healthy dose of several inches of rain. The heaviest rains look to be out to sea, where amounts in excess of 7 inches are possible as indicated on the above graphic. 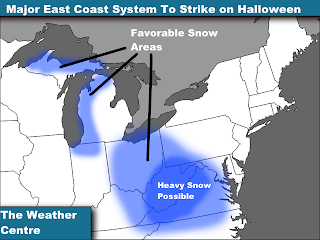 The areas most at risk for snowfall include the Appalachians and part of the Ohio Valley, where the latest ECMWF and GFS have indicated the best chances for snowfall are centered. This risk of snow is moreso centered over the Appalachians, with the Ohio Valley thrown in there with more uncertainty than confidence. Because of the cold air being pulled south by Sandy, the lake effect snow machine should start going over the Michigan and Indiana sides of Lake Michigan. The Upper part of Michigan will also get in on some lake effect snow action. 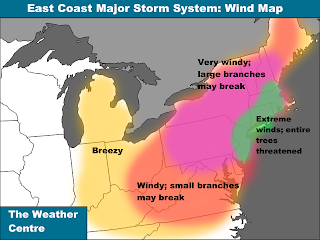 Winds will be howling with Sandy. As she comes ashore, windy conditions can be expected across much of the Northeast, Ohio Valley and Mid Atlantic. The trouble begins in the Northeast, where some of the larger branches may break as Sandy roars in. Coastal cities in New York and Pennsylvania will suffer the worst winds, as offshore winds come on land and worsen the wind crisis. Entire trees will be threatened by these winds. 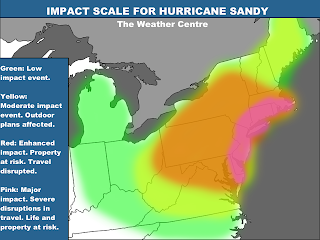 On The Weather Centre's Exclusive Impact Scale, I believe that only the Northeast and Mid Atlantic stand a chance at some enhanced impacts or major impacts on this scale, meaning property will be at risk and travel is likely to be disrupted. In areas immediately along shore, there will be 'Major Impacts', meaning significant travel disruptions and overall service disruptions are expected. Life and property will be at risk, mainly from winds and possible severe weather.

This storm will be a doozy. If I lived in the 'Major Impacts' area, I would want to stock up at the supermarket for supplies, as power is more than likely going to fail in at least some of the 'Enhanced Impacts' zone. Also, if you have any old or ailing trees in your neighborhood, keep an eye on them. Make sure your property is not in harms way, as trees of all ages may be damaged. Keep tabs on the elderly, those with disabilities, and those who, for some reason, need electricity in their lives (i.e. medical, for pets, etc.), as these people will be most prone to bearing the brunt of the storm's effects.

Andrew
By Andrew at 4:06 PM No comments: