May 11: Severe Weather Outbreak (Issued May 10)

There is a moderate risk of severe weather in Central Oklahoma and Central Kansas.
It is possible that the earliest these storms develop could be in mid-morning. I do believe that is possible, but instability may need a boost and may have a better chance for late morning.
Deep layer shear will increase going into the day, signifying a tornado threat.
There is the risk for early, lesser convection which would delay the strongest storms and possibly lower the risk altogether. Cloud cover by itself could also do this.
The second round of storms is possible midday into late afternoon. The watch zone for worst weather appears to be in the Kansas portion of the moderate risk. Supercells are once again possible, and I believe the tornado risk is more increased than in the morning. However, there is uncertainty about early cloud cover and if that may contribute to a lower severe weather threat. 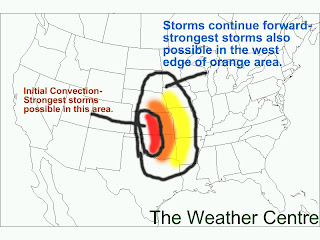 At this time, a tornado watch is in effect until 12 am.
The threats at this time are Tornadoes, Hail to 2 inches and Thunderstorm Wind Gusts to 70 mph.
Areas in this watch are in Central Minnesota.

DISCUSSION
Storms are currently developing in Central Minnesota. Although the potential threats include tornadoes, I am losing confidence in this threat as these storms go linear. This will produce more of a damaging wind threat.
Why is the tornado threat decreasing? It is much harder for anything to spin while aligned in a line. That's just the logic of it.
These storms are developing along a frontal boundary associated with low pressure systems pushing into Minnesota. Large hail is possible with the lift and instability that is occurring in the dynamic atmosphere.
By Andrew at 7:15 PM No comments:

May 10 Risk of Severe Weather

There is expected to be a slight risk for storms today and tonight in portions of the country. In the Appalachians, warming temperatures and a weather disturbance should ignite the original storms around noon with very scattered coverage but begin to increase around 3 pm in coverage and intensity. The moderate/strong instability in the atmosphere, as proven by a 0z sounding indicating 3000 j/kg of CAPE forecast, will provide breeding grounds for storms. The environment, while it may be supportive of supercells with a primary hail threat, locally enhanced instability may boost the tornado threat and hail size potential. A wind threat is also possible should line segment storms develop. At this point, models aren't handling this solution with a grip, but the GFS has been noted as aggressive.

In the Plains and Upper MS Valley, strong mid level jet stream of up to 70 knots will pump warm air into the region, setting the stage for instability. Storm initiation is expected late this afternoon, around 4 pm CDT, with the storms actually firing up into 5 pm. With potential CAPE values into the 4500 j/kg marks, a large hail threat is expected with supercellular storms that may initiate. This threat is more likely should a storm cluster continue through the evening, when the low level flow is expected to strengthen.

Finally, in Texas, strong low level flow and instability will collide with a high amplitude, upper level trough in the region. Storm initiation can be expected on the eastern portion of the mid level jet stream. This jet stream will create moderate shear, which, combined with the factors above, will become favorable for supercells. A large hail threat is possible. The models indicate convection should be somewhat isolated, and the SPC has decided to delineate only a narrow portion of Texas.