There is potential for a wintry side and a severe side to the next storm system in the US. We will start with the severe side. 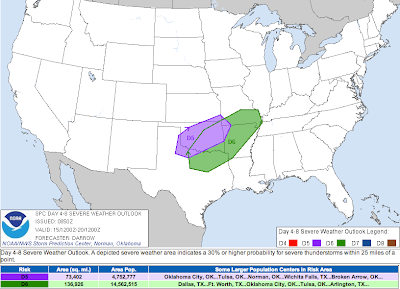 The Storm Prediction Center has outlined two areas of interest in the Southern Plains- one on April 16th (purple) and another on April 17th (green). These outlines serve as long range indications that the SPC is monitoring the potential for a severe weather event on April 16th and 17th.

Model forecasts have been consistent with having a storm system sweeping through the Rocky Mountains before shifting east and provoking active weather in the outlined areas. The American GFS and European ECMWF models are in good agreement on this type of scenario happening. However, what happens when the system gets into the Plains is a different story. Precipitation forecasts from the European model show a very active event over the purple outlined area for April 16th, but sounding forecasts from the GFS are much less enthusiastic. Primary concern with the sounding data is what appears to be a strong capping inversion (thunderstorm suppressor) from the surface to about 4000 meters off the ground. This capping inversion is predicted to be stronger than the event we saw, making the event difficult to get going. Past the layer of stability, the instability higher off the ground is weaker than what we saw with the previous event. These two factors make for a hard time in getting thunderstorms to form. When moving forward in time, sounding forecasts become slightly better for thunderstorm development, with instability rapidly increasing throughout the day in eastern Oklahoma. Despite this, concern remains with the lack of instability from the surface to roughly 3200 meters above ground level. 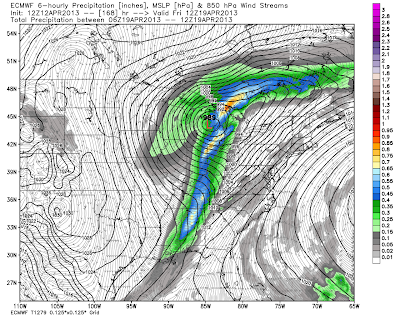 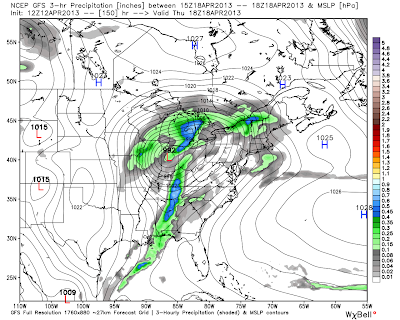 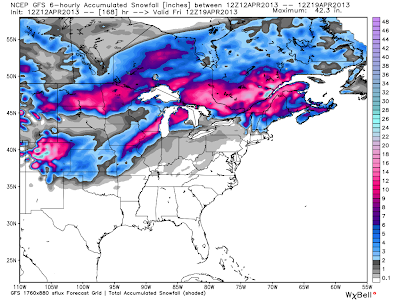 A quick glance at other models and ensembles reveals that the American GFS model is on the losing side, with the Canadian and US Navy models agreeing with the European northward solution. The United Kingdom's forecast model agrees with the American solution, but the UK's model usually is not the best with forecasting storm systems. The American ensemble members agree with its parent GFS model, but that's to be expected. All in all, we are still a while away before we reach a solution on this event.