I am sending out a message of warning to those in the Plains for the next few weeks to be on the lookout.


A vortex will soon be forming in Alaska. This vortex of low pressure will act as a breeding ground for storm systems. The storm systems will come onshore the US and follow the jet stream north into the Canada/US border.

The jet stream will be displaced north into the Canada/US border as a cause-effect relationship between the Alaskan Vortex and a ridge in the Central and Eastern US.

As a system comes onshore, it will try to push eastward instead of northeast, pressing down on the jet stream and creating higher wind speeds in the jet stream as a result. As the system moves along the jet stream, the back end of it will carry cold, dry air from the Mountains. Out in front of the storm system will be moist, unstable Gulf of Mexico air.

At some point, the cold air will clash with the warm air, igniting thunderstorms that will likely start out as discrete super cells forming in the midst of the warm, humid air out ahead of the system. These storm cells may have rotation, thanks to the jet stream. Eventually, these storm cells would become linear as a cold front traverses across the Northern US with the severe storms.

I'm not saying this will happen with every storm, but as of now that is how things are looking.
Something I am seeing in the most recent 12z GFS run is how a storm is down in the South US, but the jet stream is not latching on to it. I feel that the GFS is incorrectly interpreting that situation. 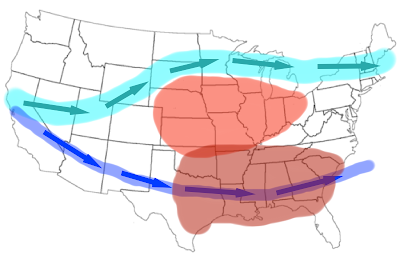 Here are two scenarios for what could happen. The first is the light blue storm track, which rides along the jet stream and may produce severe storms south of it (light red).

The second track is if the jet stream is too far north so the system meanders along the Gulf Coast, wrapped up in warm, unstable Gulf air. The entire Southeast and South Plains are taken ahold of severe storms in that situation.

Again, this is very long range and may not happen at all- it is a mere representation of what has recently been shown and put together with some of my forecasting.
By Andrew at 12:40 PM 7 comments:

Tornado Warning on right sidebar of this image. 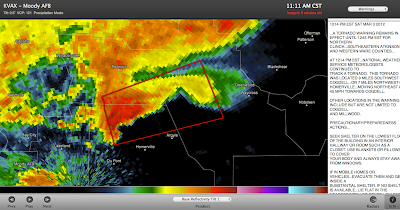 This is a comparison of my forecast to what the tornado outbreak resulted in.
Here was my forecast for tornadoes, issued yesterday morning. 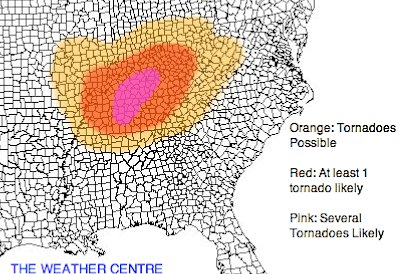 My 'hotspot' for the day was central Kentucky and Tennessee.
Here are the severe weather reports from yesterday. 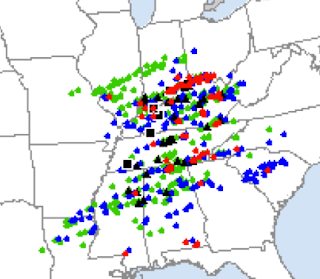 The tornado hotspot for yesterday was the Ohio/Indiana/Kentucky borders into the rest of KY and TN.
My personal rating for this would be a B.

Achievements of the forecast vs comparison:
-Many tornadoes were recorded in the two states being watched the closest.
-Most of the severe weather reports were in Tennessee, where I had my forecast most pointed towards.

Losses of the forecast vs comparison:
-Did not adequately cover the OH/KY and IN/KY border, where the models had still been showing high tornado potential levels.
-More tornadoes slightly south of the main monitoring forecast area.