It looks like the Atlantic Hurricane Season of 2013 is going to get going in the next couple of weeks, as model guidance has begun to push for a tropical cyclone forming in the first week of June, possibly affecting the United States as a result.

We have begun a push into a new weather pattern in the last several days; one that is likely to bring not only additional severe weather events, but additional likelihoods of tropical cyclone formation in the Atlantic. The short range mid-level forecast chart shown above depicts the pattern of West US troughing of low pressure and Northeast US ridging of high pressure that we will be in for at least the next week or two. During this time, it is very possible we will see our first tropical development in the Caribbean basin.

Model guidance has been projecting a weak tropical cyclone to hit Florida in the first week of June, and this guidance has been telling of this projection for multiple days now. The strength of this tropical cyclone has varied in both timeframe and strength, but the general idea of a tropical threat in the first 10 days of June has remained nearly steadfast. Included in this suite of tropical development-allowing model guidance is the European ensemble set and the GFS model, which has been the most prevalent in calling for a tropical cyclone hitting the western Florida coast. The GFS tells of a cyclone that could drop over 2 inches of rain in a 60 hour period over much of Florida. This does not seem like much, but then again you must remember we are a good 10 days out from the first potential shot at this cyclone's formation. 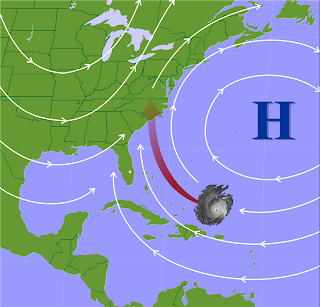 What tells me there is potential for cyclone formation is just how the upcoming weather pattern will match up with the ideal scenario graphic from Penn State University above. In the above graphic, you see high pressure dominating the Atlantic in an action that forces tropical cyclones to move through the Caribbean and Gulf of Mexico basins rather than shoot out to sea. This pattern also enables the chance of a landfalling tropical cyclone to rise significantly. If the projected atmospheric pattern currently in model guidance verifies, we would likely be seeing an eastern Gulf Coast tropical cyclone threat in the first 2 weeks of June.

A storm system will begin to reach a negative tilt going into Wednesday, indicating that the highest mid-level vorticity values associated with this storm will be pointed towards the southeast. As a result, the storm system will strengthen and amplify the pattern that this severe weather risk will be in. Strong jet stream divergence to the immediate east of the moderate risk area, as well as a strengthening lower level jet stream will lead to an atmospheric wind field that favors severe weather.


A special convective WRF model that was run earlier today is indicating that a tornadic environment will share the stage with a damaging wind-style convective cluster. You can see the intense thunderstorm formation over the Plains for Wednesday evening on the top image, and these storms are split into two categories. The first involves the linear thunderstorms spread from central Nebraska down to the border of the Texas and Oklahoma panhandles. The second type of storms is the individual cells in Oklahoma. While one would expect the individual cells to have more potential than the linear system, it looks like the strongest helicity values will be placed inside the linear storm cells.

Regardless of where the highest helicity values end up, anyone inside the moderate risk area should be watchful for the potential of tornadoes, damaging winds and large hail.

Andrew
By Andrew at 4:55 PM No comments: