Midwest: Two cold fronts are pushing through the region at this hour, with the northernmost frontal boundary being forced south by a vorticity center that is bottoming out into the Great Lakes. Progression of these cold fronts will lead to a chilly weekend before a gradual warm-up builds into the mid-week. No severe weather expected.

Northeast/Mid-Atlantic: Cold front progressing east will interact with a region of heightened moisture in the Mid-Atlantic and initiate showers and thunderstorms. Current Storm Prediction Center outlook highlights this area for a Slight Risk of severe weather. Cooler temperatures expected as cold fronts are moved east in coming days. Severe weather is possible.

Southeast/Gulf Coast: Low pressure system that initiated strong thunderstorms in Texas last night has shifted into Mexico as the complex of active weather skirts the Gulf Coast, mainly confined over the Gulf of Mexico waters. Isolated strong weather risk along the coastline before the complex of showers and thunderstorms makes landfall in Florida. Severe weather is possible during that time.

Pacific Northwest: Disturbance is being pushed north into Canada as a result of high pressure development in the Western United States. Despite the movement of this disturbance away from the region, precipitation remains possible. Most likely scenario is a cloudy day with precipitation entering the region this evening as the back-end of this disturbance is far enough south to interact with the Pacific Northwest. No severe weather expected. 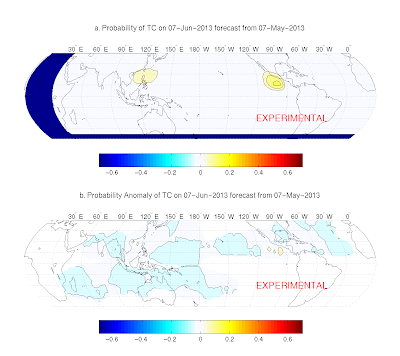 Andrew
By Andrew at 11:30 AM No comments: Links to this post 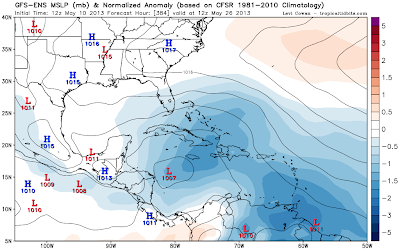 It appears that the first tropical cyclone threat of the Atlantic Hurricane Season is showing up on long range computer models. The American GFS ensembles have been showing cyclogenesis occurring in the Caribbean, to the point that tropical development takes place. Three of the past four GFS model runs have had the development of a tropical cyclone in the Caribbean. While the ensembles don't go out farther than the cyclone reaching the entrance to the Gulf of Mexico, it looks like the Gulf Coast would be at risk for a potential landfall, should this forecast verify. The good news is that forecasts going out this far rarely verify. What should be noted is a building consistency in the model projections, as well as how an ensemble set is showing this development, not just a single model. 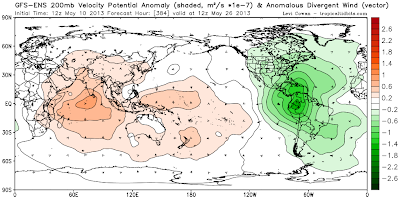 The reason the GFS wants tropical development to occur is due to its idea that the current Madden-Julian Oscillation (MJO) wave in the Indian Ocean will die off and transition to Phase 8, the phase that finds enhanced tropical convection in the Atlantic and Caribbean waters. The American GFS Ensembles project below normal 200mb velocity potential anomalies across northern South America well into the Caribbean and Atlantic. If you recall, I warned about the potential of tropical cyclone development in early June just a few days ago- it looks like that threat may be materializing. The placement of these anomalies indicates that this would indeed be Phase 8 of the MJO. However, the GFS may be taking this MJO wave too quickly to Phase 8.

This image shows the projected Madden-Julian Oscillation forecasts from three forecast systems- the GFS Ensembles (green), the Canadian Ensembles (maroon), and the European Ensembles (yellow). Looking at the end of the GFS ensembles forecast, it is clear that the MJO wave is pushed into Phases 8 and 1 at the end of the forecast timeframe, echoing what I described in the velocity potential image above. The Canadian ensemble set is onboard with this idea of a fast-paced MJO wave progression, landing the wave in Phase 8 by the end of its run. What should be noted here is that the Canadian forecast system is notorious for being horribly inaccurate at this forecast range. We then see the European ensemble set in yellow, which seems to die off as it enters the circle in the middle of the image, called the Circle of Death (COD) The COD means that the MJO wave is too weak to have a defined phase, and thus too weak to have a noticeable effect on synoptic weather here in the US and around the world. The European ensembles prefer to have the MJO wave linger in this Circle of Death rather than progress it east and into the Caribbean and Atlantic seas.

After looking around other model solutions, it certainly still looks like the threat for tropical development (either in the East Pacific or Caribbean) is a logical one. I will monitor this threat closely over coming days and weeks and wil update as is needed.

Andrew
By Andrew at 11:29 AM No comments: Links to this post