The polar vortex, a tight low pressure system in the Arctic Circle whose strength determines how much cold air North America may receive in the winter, appears to be headed for a weaker than normal stature this winter.

Two factors are contributing to this new development: the QBO and the stratosphere.

The QBO, also known as the Quasi-Biennial Oscillation, is an atmospheric oscillation that has a positive and negative phase. In the positive phase, a certain wind pattern in the stratosphere enhances the polar vortex, which in turn restricts cold air that may move to North America. On the other hand, the negative QBO permits a weaker polar vortex, resulting in more opportunities for cold weather in the winter. 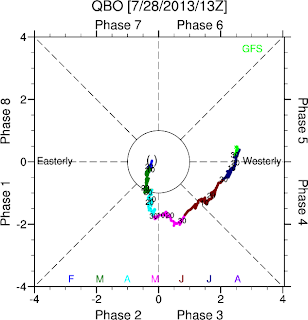 This image may look a little intimidating, but bear with me, I'll explain it. This chart, developed by Mike Ventrice, shows eight different phases the QBO can take. As is shown on the left and right sides of this diagram, Phases 7, 8, 1 and 2 tend to be associated with the Easterly (Negative) QBO, while Phases 3, 4, 5 and 6 correspond with the Westerly (Positive) QBO. As the chart tells, we are in the mature stage of this positive QBO, something winter weather lovers don't want to see when winter comes around. I posted a few days ago about how the positive QBO is surviving in a very hostile environment, and this should allow the mature +QBO to stay close to the circle in the middle of the chart (this circle indicates the QBO is too weak to be in a certain phase) as it progresses into Phases 6, 7 and 8 by late fall. When November rolls around, I expect the QBO to be transitioning to a negative phase, which will give the green light for a weaker polar vortex.

While the QBO is in kind of a wait-and-see mode for when/if it will move to its Easterly (negative) phase, the current lower stratosphere temperatures are already hinting at a weaker than normal polar vortex this winter.

When looking at past years with stratospheric temperatures comparable to what we have seen this past spring and into summer, the following years came up:

So, I took a look at the winters of 2003-2004 and 1997-1998 in the stratosphere. Both winters had rather significant stratospheric warming events in the early winter, with warmings continuing into the later winter. This bodes well for the idea of a weaker than normal polar vortex this winter.

A new item I found was how the winter stratosphere (December-January-February) tends to reflect stratospheric height anomalies in the summer months (June-July-August).

The QBO moving from positive to negative (if not neutral-negative), along with an already-favorable stratosphere, tells me the chances of an anomalously weak polar vortex are on the 'likely' side.