It's looking like we'll be seeing another snowstorm between the February 9-14 period, and some indications are that this could be a rather significant snowstorm. 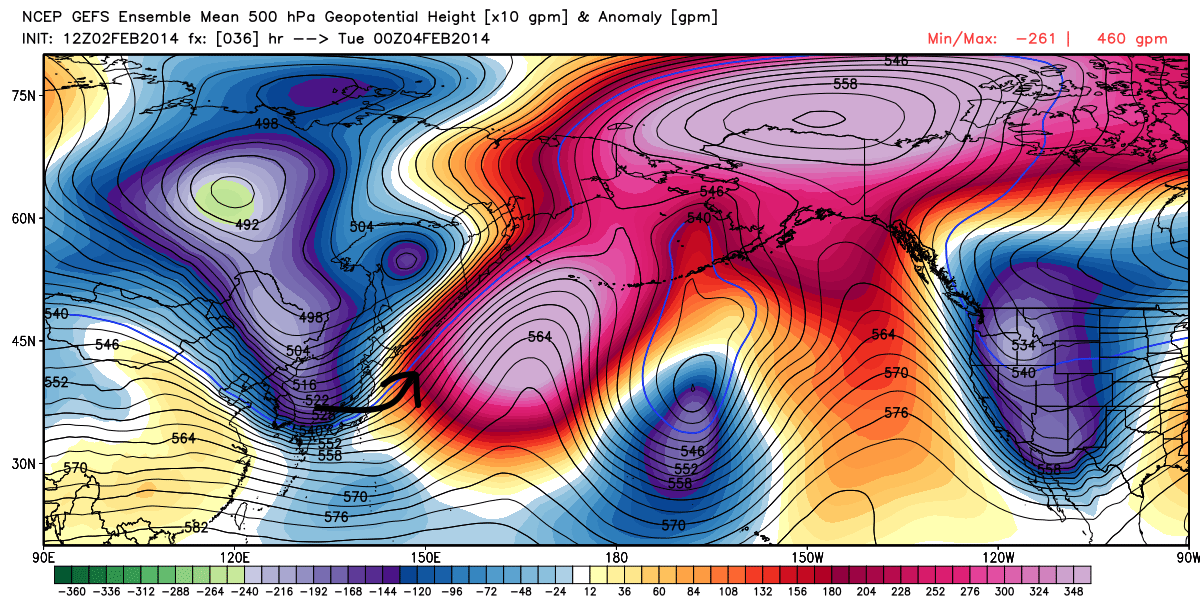 Above, we see the 500mb height anomaly forecast for the evening of February 3rd. We see a strong trough digging southeast towards Japan. The arrow I drew gives you an idea of where the storm system goes in the couple of days after this forecast image. The storm then continues to dig before it is a fully negative-tilted storm, indicating the system has reached peak maturity and strength. Then, the system cuts north, as the arrow shows you. Using Joe Renken's idea that a storm system over Japan correlates to a storm system in the United States 6-10 days later, we can project that a storm system will hit the United States around a February 9-13 time period. This fits almost completely inside the timeframe I put in this post, with the one day extension to February 14th brought in to account for any delays model guidances may encounter, since model guidance can have a bias that results in forecasts being too fast with storm systems.

The curve in the East Asian storm system suggests that the eventual storm system in the US may also curve north. This includes a variety of possibilities, including a Colorado Low storm, a Panhandle Hook storm, an Apps Runner storm, or even a Nor'easter.

Also supporting this potential storm system is the Lezak Recurring Cycle. The Lezak Recurring Cycle, or LRC, is a tool developed by meteorologist Gary Lezak that, in essence, can enable forecasters to predict the overall weather pattern months in advance. The gist of the LRC involves a cycling weather pattern that develops in October and November of each year; no pattern is the same from year to year. Around mid November, the LRC begins to repeat, meaning we start to see a similar weather pattern in mid November that we saw in early October. This means that the cycling pattern has begun, and it will continue to cycle on a regular (non-changing) 40-60 day interval for the next ~10 months before it dissipates over the following summer.

This season's LRC cycle is on a 57 day cycle length, meaning the weather we saw in December can be expected to "come back" as we enter February. The image above shows the surface condition map on the left and 500mb map on the right from December 14, 2013. If w extrapolate that date out 57 days, we come to the February 9th mark. As the 500mb map above shows, we have high pressure over the West Coast, with only slight ridging in the Southeast and the storm system easily working its way across the Plains. Based on the pattern I'm seeing to start February, I'm thinking a storm track similar to the one this system took in mid-December could very well be in the cards. If you read my February 4-6 posts, you may recognize this storm, as I talked about how it would correlate with that storm system. It seems I miscounted a bit, and the 57 day period from December 14th goes out to February 9th, rather than 7th. Therefore, this December 14th system looks to correlate with the February 9-14 storm threat.

Now, I named off a few possibilities for this system's track, which included a Colorado Low track, a Panhandle Hook track, an Apps Runner track or a Nor'easter track. If the LRC is to be believed, we could narrow down the track possibilities to a Colorado Low track or Panhandle Hook track. It's too far out to nail down exact probabilities of these tracks, but the two aforementioned tracks may be more likely than the other two tracks.

The 12z GFS actually showed a solution not unlike the one being printed out by the LRC and East Asian correlation.

In the 12z GFS model, we saw a storm system dig southeast into the southern Plains before going negative tilt, and eventually closing off as it began to move north. This forecast scenario looks rather similar to the one we're seeing with the February 4-6 system, though this forecast is certainly much more ominous than the February 4-6 forecast.

Just for a little eye candy, here's the snowfall forecast from that 12z GFS model run. Please note this is not my forecast, nor do I endorse it- just showing you what this beast could become if it really is as strong as projected (though the probability of such an occurence working out is rather low).

Andrew
By Andrew at 3:20 PM 9 comments: Links to this post

There will be a major snowstorm over the February 4-6 time period, which has the potential to drop up to a foot of snow.

The GFS model, whose 87 hour snow projection is shown above, indicates we will see heavy snowfall in the 8-12" range across easterk Kansas, southeast Nebraska, northern Missouri and into Iowa. Amounts then taper off into the 3-6" range in Illinois, before ramping back up in the Northeast, where amounts over 12 inches are possible. The GFS model has been consistent with this storm thus far, and with the storm only a couple of days away, it looks like this is the track that is more likely to work out. The snow amounts have moved north of the far south storm tracks that we saw days earlier, and this north shift was expected, per earlier posts I put out.

The NAM model is much more enthusiastic with snowfall, laying down 6 to 10 inches of snow in Kansas, Nebraska and much of Missouri before pounding the Lower Great Lakes region with over 12 inches of snow. Northern Indiana appears to be heading for 20 inches of snow if this model is to be believed! However, the NAM model had previously been showing a far northwest solution, so additional nudges south may be anticipated. I do expect snowfall amounts will be lowered in future forecasts, as the NAM model is notorious for over-estimating snowfall. The stripe of snowfall extending from Texas to the Mid-Atlantic is not associated with this storm.

Because the storm system has not come ashore yet, slight changes in storm track and snowfall amounts can be anticipated. We should begin to see a solid model consensus tomorrow or tomorrow evening, when the system comes onshore and the balloon network can get fresh data from the storm.

Andrew
By Andrew at 2:27 PM 5 comments: Links to this post