This is a special update for Invest 92L.
The ECMWF, proven to be more accurate than the GFS, has taken a dramatic turn north with Invest 92L, sending it out to sea instead of potentially impacting the East Coast. But first, let's take a look at the invest itself.

Invest 92 is quite a vigorous tropical wave that has barely moved offshore of Africa. Already it has a 70 percent chance of becoming a tropical system. Right now, it is moving westward. It does appear that the ECMWF may have initiated a bit north of where the system is now. While that may not seem like a huge deal, in the long run it could determine where the system goes.
So here is hour 168 of the ECMWF. The ECMWF itself has moved north since the 0z run early this morning. However, the model still keeps Invest 92 strong and positions itself into a hurricane Category 1 at minimum. Wind speeds are expected to top 100 knots, but this is considered long range model guidance and should not be taken too seriously at this stage.
At hour 192, Invest 92L has strengthened in size and wind speed, indicating the system is feeding off of what the Atlantic has to offer. Again, this is north of the 0z run. 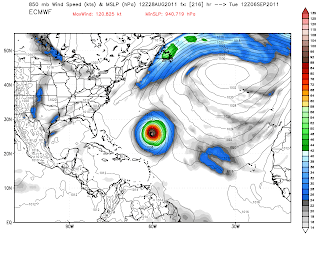 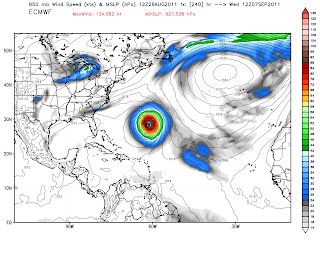 In these last 2 frames, we see the transition of how the hurricane begins to swerve OTS (out to sea) in a NE direction.

We will monitor this through the night and brief you tomorrow morning.
By Andrew at 5:34 PM No comments:

Email ThisBlogThis!Share to TwitterShare to FacebookShare to Pinterest
Related: Invest 92

I'm sorry for not issuing the special update on Invest 92L in the Atlantic, but I am working to fix a number of things that have taken up my time. I will issue one soon.
By Andrew at 5:05 PM No comments:

2012 Republican Presidential Candidate Ron Paul has stated the nation would be better off without FEMA. "There's no magic about FEMA" Paul said, "I live on the Gulf Coast and we deal with hurricanes all the time."
I am not stating my political viewpoint, but I do believe that if FEMA did not exist, there would be horrible consequences:

Not everyone lives on the Gulf Coast. Thousands of people haven't dealt with a hurricane in their life until Irene came through on the East Coast. Imagine what would have happened if FEMA wasn't around to put certain plans in action.
By Andrew at 10:05 AM No comments:

This is the ECMWF model at hour 192. Anything beyond hour 120 in any model could be inaccurate. So take this information with a fairly large grain of salt. Anyways, the ECMWF is portraying a tropical cyclone to approach the East Coast. Going WNW towards the East Coast, I would expect this system to go OTS (out to sea).
At Hour 216 of the Euro (ECMWF), the system continues a WNW movement. Now, the farther it goes on this WNW movement increases the chance of a landfall. That's right, a landfall on the East Coast. The reason this doesn't happen often is because of many factors that make tropical systems suddenly turn NE, then get thrown out to sea. But again, the more time this system spends going WNW decreases the chances of it going OTS.
This is where it gets concerning. At that point in time - Hour 240 - Invest 92 appears to be too far west to be effectively thrown out to sea. This could spell catastrophe if that doesn't happen, as the ECMWF appears to be gradually strengthening this system at this stage. We have detailed an outline of what this system would have to do to go OTS (out to sea).

Look at just how difficult it would be for this system to go out to sea without affecting land to a certain degree. This is not out of the question, but with every frame of this model run pushing this storm WNW continues to slice off a chance of an OTS ending for this storm.

(Note: It has been discovered that the ECMWF is more accurate than the GFS. Also, I had to regain my energy from the Irene frenzy yesterday, thus the low posting.)
(Note: Anything beyond 120 hours could be inaccurate, no matter what model is used.)
By Andrew at 9:49 AM No comments: