October SAI to Start Off Strong

The October SAI, which enables us to see how the Arctic Oscillation and winter temperatures will end up throughout the following winter, looks to start off strong when we actually enter the month of October.

The image at the top of this post shows projected snow cover changes over the next 192 hours from the September 19th 0z GFS (this post was made on September 19th). On the bottom right, the percentage change in snow cover over the 192 hour period is shown as +2.73%. This is the highest increase I have seen in the last 4 or so weeks of tracking the GFS and its snow cover change forecasts. 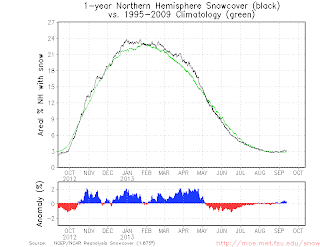 The reason I'm excited about this high increase forecast is because of where we already are in the northern hemisphere snow cover department. This graph shows observed snow cover values (black) compared to normal (green) on the top image, with anomalies at each point on the bottom. After going through a below-normal spring and early half of summer, we find ourselves in above normal territory. With snow cover projected to shoot through the roof in the next 192 hours, it is likely we see a substantial increase in this positive snow cover anomaly by the time we get to October, when the SAI comes into effect.