TS Ernesto has experienced a recent blow-up of convection on all fronts and has been able to maintain this convection as the dry air mass fades into oblivion, and warmer waters and better environmental conditions take over. The system is far from developing a core that it had not too long ago, but this certainly is a starting point for a system that has taken the beating of beatings over the past several hours.

Looking at the steering layer conditions, the energy associated with Ernesto appears to be following a current that takes the system more westward than anything, as the system will be fighting a flow that would slam Ernesto into Central America. That said, I feel that landfall on Ernesto will likely happen a bit farther south than what the NHC is forecasting (see below image). However, because the system is not in a heavily sheared area, and stronger storms tend to want to curve north, there remains the potential for a more northwest direction. Whether that happens remains to be seen.

Andrew
By Andrew at 9:06 PM No comments: Links to this post

Overnight, Tropical Storm Ernesto took an unanticipated jump to the south, and this was the nail in the coffin for a system that is going up against harsh, dry air.

The National Hurricane Center is predicting a westward movement of Ernesto before taking a northwest turn and crashing into the Yucatan Peninsula. After landfall, Ernesto is anticipated to strengthen into a hurricane before landfalling in Texas. But what do other models say to that? 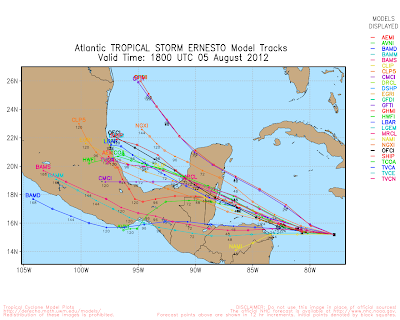 The latest 18z model suite suggests that Ernesto will follow the NHC track mentioned above and landfall into the Yucatan Peninsula and then Mexico. There is another agreement between a few models, where Ernesto remains too weak to go northwest and crashes into Central America before being spit out into the Eastern Pacific. 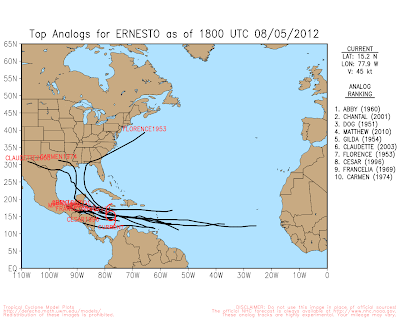 Analogs from hurricanes in similar situations as Ernesto indicate that a dying of the system occurred with the majority of models that hit the lower half of the Yucatan Peninsula. This does not bode well for Ernesto, which is already a mess at the moment, judging by satellite imagery below. 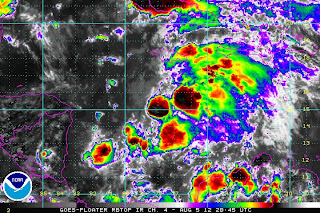 Andrew
By Andrew at 4:34 PM No comments: Links to this post

After Ernesto makes landfall on the Yucatan Peninsula, it will be too weak to rapidly strengthen and move northeast into the Gulf Coast.
An overnight wobble south was the nail in the coffin for any Gulf Coast landfall possibilities.

I will have a full post out later today. 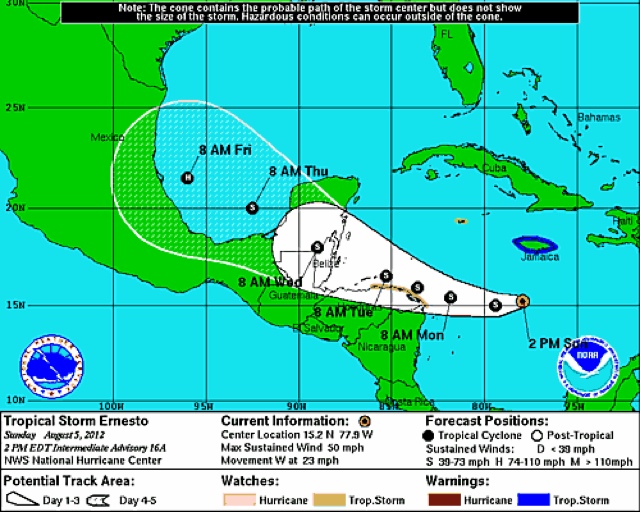 By Andrew at 2:51 PM No comments: Links to this post