Both the 12z ECMWF and 12z GFS are showing a break in the polar vortex- a significant development that may lead to the much-anticipated pattern change. Another thing we're seeing in these 8-10 day height anomaly outlooks are trough patterns in the Southwest as well as offshore the Southeast. This means that the cutoff low pattern may return to the Southwest and bring some snowy weather to the Plains. Possibly. A lot has to be determined, but it does match up with my theory of cutoff lows returning.
By Andrew at 9:25 PM 16 comments: Links to this post

As the system that will be bringing harshly cold air into the US departs, this cold air will work quickly to ignite the lake effect snow system for the Great Lakes. This lake effect snow, while it may not stick, the snow may be enough to coat the ground. Here's the forecast snow depth from the 18z GFS.

The snowfall from the lake effect snow may put down up to a foot of snow up in the far northern reaches of Michigan. Lake Michigan may put down up to 6 inches of snow, with lesser accumulation in the eastern Great Lakes.
By Andrew at 8:59 PM No comments: Links to this post


As this system moves through, we will be seeing the coldest air of the season move through the Midwest, and even down to Florida before curving back up to the Northeast. The coldest air should flow through the Midwest and Northeast as this major cold wave moves through. The ECMWF is showing 850mb temperatures below 0 degrees down through Florida. By far, this will be the biggest cold wave the nation has experienced. If the wave of storm systems continues to come through Canada in the same fashion this one did (as is expected), we will continue to see big cold blasts as well as likely displacing some of the polar vortex.
By Andrew at 8:51 PM 1 comment: Links to this post

Icy Mix Possible This Evening in the Northeast

As a clipper system moves east-northeast into Canada, we will be seeing a mix of precipitation in northern parts of New York, as well as north Vermont. This could make for some slippery conditions on roads for that area. Some snow may mix in, depending on the temperature gradient for the area as a from precedes the system itself. Rain and embedded thunderstorms will be occurring right near the storm system itself out by Michigan. However, it isn't looking like any huge thunderstorms will be present. There is a freezing rain advisory for a small portion of northern New York depicted below:

By Andrew at 7:27 PM No comments: Links to this post

We are seeing a major stratospheric warming event take place in the last several days. We are seeing some big temperature anomalies from the 30mb level up to the 1mb level. The big part is that the warming is occurring over Alaska. Because the warming is occurring over Alaska, we might be seeing the semi-permanent low pressure system over Alaska weaken as the warming may progress down into the troposphere. If this warming continues, the pattern change would definitely be helped along. The warmth may be able to propagate into the North Pole, where a disruption in the Polar Vortex could break the stubborn +AO/+NAO regime which has been producing a snow drought over the East US. 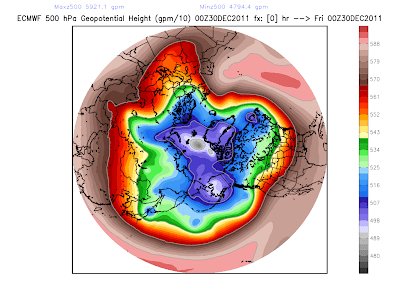 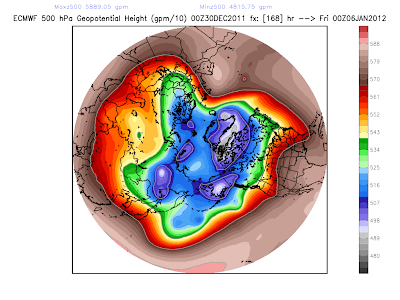 At hour 168, we are seeing a ridge from Asia pump north into the polar vortex and interrupt it for a little bit. This ridge will be pulled north into the main polar vortex and disrupt the vortex. Essentially, the NAO and AO will also be disrupted. The AO, which is based in the North Pole, is the biggest piece that will be affected. If the vortex breaks, the extremely cold air that has been locked up may flow southward as the vortex breaks. Moving ahead to hour 240 is seeing the low pressure system over Alaska take a big weakening hit, which may bring some active weather into the US. However, no model does well at 10 days out, so take this as something to watch.
But let's say that this disruption does happen. Well, what would happen to the all-important NAO?
The old 0z ECMWF shows the point of when the expected break in the polar vortex is, as well as the effects of the polar vortex break. The new 12z ECMWF does now show the downward trend, but an up-and-down pattern similar to what we have outlined as the time when the vortex breaks. We are still seeing a more persistent ridge break into the polar vortex, however, so the NAO image above should not be discounted.

The NAO has been wildly swinging. With stronger systems bringing stronger positive NAO values, this means the potential for lower NAO values, going off of Newton's laws: With every action there is an equal and opposite reaction. If we use that law, it can be determined that a strong +NAO value will eventually lead into a strong -NAO sometime this winter.

SNOWSTORM PREDICTIONS---
Pre note: Confidence is low on these predictions. It is entirely possible that these snowstorms will not happen. In other words, don't hold me to these.

January 6-11: An active period is already setting up that should lead into the first couple weeks of January, if not longer. Among those possibly affected include the North Plains and the Northeast.

January 14-18: A couple shots of low pressure systems into the Southwest could make for a good snow somewhere in the Plains or Midwest.

LONG RANGE PREDICTIONS---
A quick start to January will continue as the deep low pressure system over Alaska weakens as the ridge interrupts the polar vortex in the early new year. Late January may bring a deep chill to much of the country as the Arctic Oscillation dips far enough into negative territory to unleash pure Arctic air. Using Newton's Laws mentioned above, we can expect a BIG snowstorm for the Northeast sometime this winter when the NAO goes negative in response to a very positive NAO so far this winter.
By Andrew at 3:00 PM 15 comments: Links to this post

By Andrew at 2:12 PM No comments: Links to this post