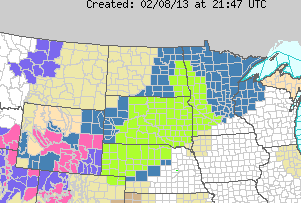 Blizzard watches have been issued for areas in the light green, and many others in winter storm watches (dark blue), as a potential blizzard bears down on the region. 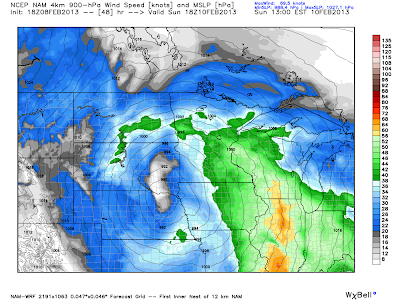 A storm system will be ejecting from the Rockies in the next 24-36 hours, as pictured above. As it does so, lower level winds will be on the increase as the system strengthens. The resulting pressure drop will influence fairly strong lower level winds, with the highest values in south central North Dakota and north central South Dakota. With the system being as strong as it is, Gulf moisture should be pulled north far enough for the northwestern side of this storm system to experience the highest snow accumulations and hourly snowfall accumulation rates. 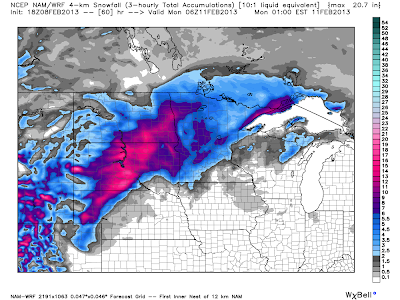 Total snowfall will exceed one foot in many areas, with the highest totals concentrated in much of South Dakota and even into southeast North Dakota. Totals are still rising in Minnesota, however this model does not have the entire snow event in its timeframe yet for Minnesota. I anticipate widespread reports of over half a foot in much of Minnesota, with isolated areas flirting with 1 foot, especially in northwest Minnesota.

Prognosis... Historic blizzard event evolving as expected. Main piece of energy has shifted northeast since this morning as it moves up the coastline. Infrared imagery (pictured above) and hourly surface analysis shows that the Alberta Clipper (seen as ragged green to the west of main storm system) continues to be dragged into the system. Further inspection of infrared imagery and radar reflectivity reveals a paralyzing snow event continues to unfold in New England, especially in Massachusetts and surrounding states. I anticipate the heaviest snow to move onshore in the next 3 hours, impacting Mass. the most at this point. High resolution model forecasts confirm these suspicions, with slightly lessened but still intense snowfall continuing across the Northeast until at least midnight, possibly later. Saturday morning will be an incredible sight to see; transportation will have to be made by dogsled. 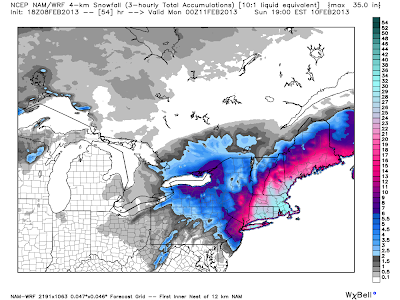 High resolution forecasts for this historic event continue to print over 30 inches for many areas, with Massachusetts bearing the brunt. Lake effect snowfall in the eastern Great Lakes will enhance totals in their respective coastline areas, likely adding at least a couple inches as the storm moves out.

Andrew
By Andrew at 4:06 PM No comments: 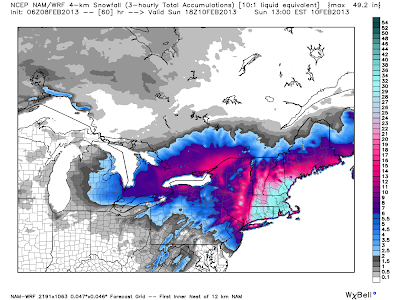 The latest NAM high resolution forecast has upped the ante on snowfall totals from this storm. Earlier yesterday, it was showing amounts that were beginning to hit that 30-35 inch mark. Now, multiple states in the Northeast are at risk for over 25 inches of snow, with just under 50 inches of snow aiming at east Massachusetts.

Surface analysis shows Albera Clipper in central and eastern Great Lakes, progressing eastward, while the main part of this system is immediately offshore the Mid-Atlantic. As the main storm system continues to move north up the coast, the clipper system will get sucked into its force and the two will collide. When this collision happens, the combined storm system will have lower level wind speeds nearing 100 knots. Thats over hurricane force!

Power outages and coastal flooding is expected. Preparations must be in place for this historic and potentially life-threatening storm system.