I expect the spring of 2013 to bring the heart of severe weather into the Midwest and eastern Plains, away from its usual spot in the central and southern Plains. It's time to review the logistics behind this forecast.

First off is the ongoing drought. There are still many states in the central and southern Plains well into severe drought status. This severe drought has actually reached its highest level, 'Exceptional', in Nebraska, Kansas and Oklahoma, just to name a few. With heavy rains only hitting the Gulf Coast in recent days, no relief is in sight to alleviate a very serious drought problem across much of the nation.

This drought plays a significant role in severe weather (and storms in general). When storms go over land, they drop moisture as precipitation and ingest moisture as evaporation, pretty much a give-and-take. However, if the area the storm is going over is in a drought, there is no evaporation to pump more moisture into the system. As a result, precipitation output is reduced, and the storm weakens overall. This does pose a problem as far as getting storms going for the upcoming spring, and this is the basis of something called a baroclinic zone. The term baroclinic zone defines an area of temperature gradient across an area, commonly a zone where storm formation is enhanced. If we apply the baroclinic zone to this situation, we find that the zone would most likely attempt to form in the Midwest, particularly in Wisconsin, Iowa, Illinois, Missouri and Arkansas. This baroclinic zone will form as a result of warmer temperatures in response to a lack of moisture from the drought- the lack of evaporation from the drought-stricken land refuses development of clouds and precipitation, continuing a vicious cycle that enhances the drought and baroclinic zone.

Now, I personally believe this baroclinic zone does not apply to temperatures. While the term 'baroclinic' may only refer to temperatures, there is no doubt that a moisture gradient is another, equally significant piece in the puzzle. This moisture gradient would form in the same states mentioned in the above paragraph, again in response to very dry land versus relatively dry/average precipitation land. This new moisture baroclinic zone is essentially a synoptic-scale dryline. For those unfamiliar with the term, a dryline is the separation of dry air and humid air. It is commonly found in west Texas, along the desert lands and non-desert lands. This is commonly a focal point for intense thunderstorms as well. I have little doubt that, unless several weeks of persistent rains strike the Plains, these two gradient zones will become key players in the formation and development of thunderstorms and severe weather in the Midwest and southeast Plains. 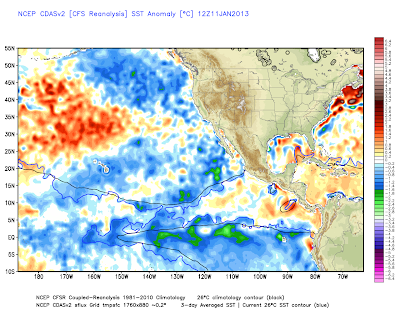 The above image shows sea surface temperature anomalies for the east Pacific. We see here some colder than normal water anomalies off the coast of northwest South America, but notice their wave-like orientation. Do you see that anywhere else on this image? If you don't, then we are most surely looking at the El Nino-Southern Oscillation, or the ENSO phenomenon. When you see these below normal water temperatures, something called a La Nina is effective.

The La Nina influences the weather by producing below normal temperature anomalies over the Pacific Northwest and North Plains during the winter months, as well as dry weather in the Southwest. Further to the east, we find wet to very wet conditions prevailing over the southern Plains, Midwest and Ohio Valley. This clarifies the presence of the storm track going through the aforementioned areas. Dry conditions persist in the Southeast, representing the dreaded Southeast Ridge that works to push storm systems northeast to affect the areas that are listed as 'Wet' in the above image. In the spring, the La Nina produces a drier than normal Plains states and cooler than normal North Plains and Pacific Northwest. Touching on that drier than normal Plains, the La Nina is indeed what kick-started the infamous 2011 drought that continues to this day.

Here is my forecast for the 2013 Severe Weather Season: 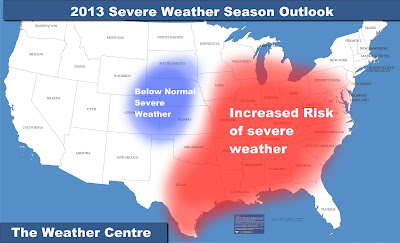 Any questions you have can be asked below. No guarantees I will answer the long ones, so try to keep them brief.

To clear up any confusion, these are 850 Millibar temperature forecasts, in Celsius. That's 5000 feet above the ground, NOT the surface.


Dangerous cold is set to arrive in the nation to wrap up January, as the polar vortex moves south and drags anomalously cold air into much of the nation.

The above forecast shows the ECMWF model's latest 12z forecast. It depicts very cold air in the lower level of the atmosphere being dragged along south from the Arctic, as a very strong storm system moves north near the Canadian Maritimes in the bottom image. As I have been predicting for quite a while, recent stratospheric warming events have led to the release of cold air from the Arctic and the split of the polar vortex - semi-permanent low pressure in that region - to persuade cold air to push south. While the extent of such cold air has been in question, models are starting to build a consensus on a severe cold shock hitting the nation.

And this potentially-dangerous cold may persist well beyond January. Indications are that a continued cold spell will last through February, with the whole month likely ending below normal. Things are definitely looking good for cold starting in late January, stay tuned to The Weather Centre for continued daily updates on this developing information!

Andrew
By Andrew at 5:01 PM 5 comments: Links to this post

Strong Storm May Strike US in Early February

The Bering Sea is giving good indications that a strong storm may hit the nation in early February.

The above image depicts surface pressure forecast values for Hour 96, roughly the morning of January 16th. The Ocean Prediction Center (OPC), which produced this image, believes this storm system will become unusually strong and reach a minimum pressure reading of 944 millibars. Thanks to the dedicated folks over on the AccuWeather Forums, it has been determined that, when there is a strong storm in the Bering Sea, another strong storm system hits the nation about 18-21 days later.

If we take the date of January 16 and move it out 18 to 21 days, we reach the timeframe of February 3 to February 6th. This is indeed the timeframe I am thinking has potential to hold a rather strong storm for the nation. Considering the polar vortex should be pressing southward and potentially a positive PNA with favorable MJO stages, it would not surprise me to see this system take a track more tuned towards the East Coast- ONLY if a negative NAO is in place. If not, expect a more Ohio Valley/Midwest track.

The potential is there, the strength still has to be determined however. I do not know if any areas will get any precipitation, so please do not ask.

Andrew
By Andrew at 4:44 PM 9 comments: Links to this post