Here's the new 4:00 PM CDT run of the TRIAD Tornado Model. I have extended the threat north, as well as slightly enhance the threat for north central Texas.
However, while I did use the normal model blend for this TRIAD model run, I mixed in the SPC SREF, which is falling into line with the regular models that are used with the TRIAD model.

As the strong storm system ejects eastward, I expect the dry line to be the focus of severe storm development tomorrow. This dryline should be positioned somewhere in west TX/OK/KS. The dry line will be crucial in this situation, as converging winds will likely get the updrafts going when instability values begin to increase over the dry line. As instability increases, updrafts should begin to form and, judging by forecast hodographs and wind shearing, a couple of these updrafts should have the capability to develop some rotation within these updrafts.
As a screaming jet stream with speeds of 100 knots+ moves over these developing updrafts, it will only increase the level of deep layer shear, also increasing the tornado threat and shifting it south and east with time. I expect to see some tornado touchdowns tomorrow, most likely in the central portions of Texas. I find it entirely possible that some tornadic action could develop farther west in Texas than what is currently progged, but due to the uncertainty of the dry line's position and slight uncertainties in the strongest instabilities in that region, I discouraged the TRIAD from stretching the threat too far west.
By Andrew at 4:00 PM 3 comments: Links to this post

For clarification, the TRIAD will be run again at its usual time (4:00 PM central) with its usual model blend.
Additionally, a poll will be up shortly asking which long range forecasts you would like me to release in honor of 500,000 views. You will be able to choose more than 1.


-Andrew
By Andrew at 2:27 PM No comments: Links to this post

Half a Million Views Reached!

Thanks to everyone for helping us reach 500,000 page views!
In honor of this, I am thinking of whipping up a few long range forecasts. What do you think?

When The Weather Centre hits 500,000 views, I will be releasing something big in honor of it. Stay tuned!
By Andrew at 11:17 AM 1 comment: Links to this post 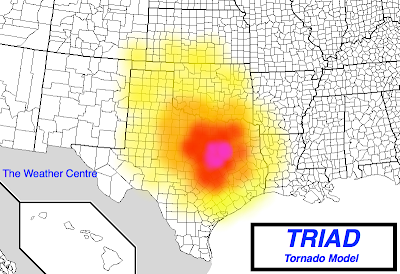 This specialized 10:30 AM run of the TRIAD Tornado Model indicates that the tornado threat is now biased in Texas. This run is biased off the SPC SREF ensemble members, as well as past trends of the SPC SREF members.
Since this is a specialized run, the regular 4:00 PM central TRIAD model run will go on as planned.

Confidence: 65%
Reason: The SPC SREF index I used to determine the TRIAD output shows wind barbs, and it looks like these winds will be converging into a line that is likely the dry line that will start out these storms. The question is if these storms will start out as individual, discrete storm cells or a linear storm system (squall line). These converging winds will continue to be the base for the tornado threat as per the SPC SREF. This 9z SPC SREF run has dramatically increased the tornado threat for this event.

The reason confidence is so low is because this is a single model and not the regular blend I would prefer to use.
By Andrew at 10:54 AM No comments: Links to this post