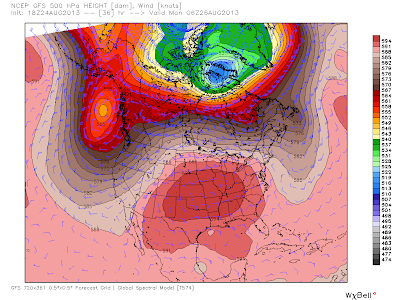 The anticipated heat wave that will begin to push east over much of the nation over the coming workweek will eventually draw back west, but will be able to sustain itself in that position.

The GFS model forecast above projects a very strong dome of high pressure over the Plains, extending its influence across much of the nation and into the Eastern Seaboard. The entrance of lower heights into the West Coast provides reason as to why the ridge of high pressure has decided to pulse east, but as soon as those lower heights shift east, it is likely portions of the East US will see a reprieve from the expected hot temperatures. 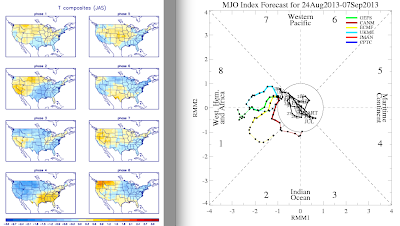 This shift of hot weather into the east US coincides with the development of a moderate to strong MJO wave that will be entering Phase 8 or 1 in coming days. Temperature composites on the left-hand side of the graphic show that Phase 1 of the MJO sees warm temperatures across much of the nation, and this will certainly be shown by this ridge of high pressure that will encompass much of the nation to kick off the workweek. Models then diverge, but the European and American ensemble suites seem to be insistent on keeping the MJO wave around Phase 1 territory. This could easily pressure the dome of high pressure into shifting east again at any time after it retreats west towards the end of the upcoming week. Basically, this could be a prolonged warm weather event. This does all depend on if model projections are correct, and we all know that high confidence in medium/long range models is playing with fire. Very long range forecasts from the European weather offices see the MJO shifting towards Phase 2, which would likely alter the weather pattern into one that sees portions of the East and Central US getting a break from the warm weather. But if the MJO stays in Phase 1, millions of people in the United States may be dealing with several days of anomalously hot temperatures.