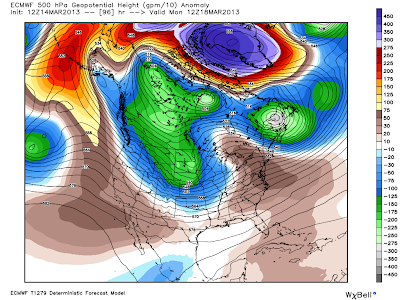 A lot of uncertainty remains with this storm system. I will try to address it in the discussion below.

Shown above is the forecasted 500mb height anomalies from the latest European model. Medium range model guidance is in solid agreement of a track benefitting the North Plains and Upper Midwest for snowfall. Despite this solid agreement, the typically-rock solid European model has been going back and forth for a while, lowering its consistency. However, I have a feeling that this track that smacks the North US with snow will be the storm's ultimate track.

General feeling is a 6-12'' event across the north Plains and Upper Midwest. Confidence is too low to address the issue any further than that. Also, for those of you who saw me mention the potential major Nor'easter int he next 5-10 days earlier this morning, the potential still remains. Shown below is the latest European snowfall map in the next several days. I am unwilling to address that region any further, as confidence is even lower compared to the Midwest. 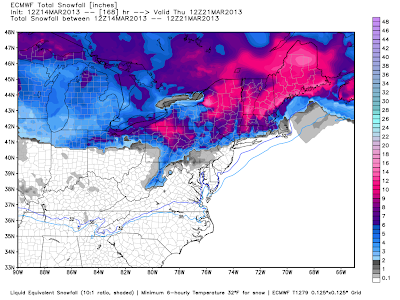 Andrew
By Andrew at 4:39 PM No comments: Links to this post