The Storm Prediction Center has issued a Moderate Risk of severe weather for a portion of the Midwest, including much of central and southern Illinois and southwest Indiana. A Slight Risk of severe weather extends from extreme southeast South Dakota to far western West Virginia. It is expected that a swath of severe thunderstorms, capable of damaging winds, as well as an isolated tornado, will traverse the aforementioned risk areas. The Moderate Risk outline highlights areas where the threat is greatest. 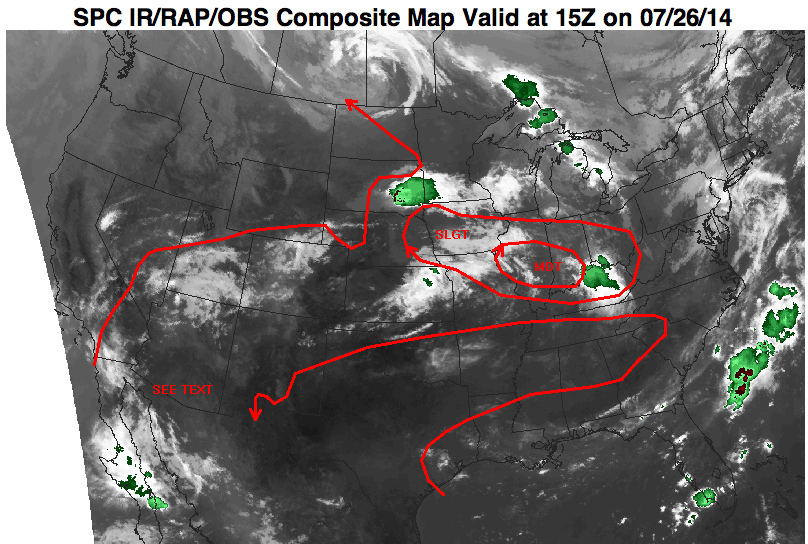 The above outlook is superimposed on the latest infrared satellite imagery on the graphic shown here. On this graphic, we see a complex of thunderstorms moving into Iowa from South Dakota, sending cloud cover off to the east into the Great Lakes, likely limiting any severe threat that was there to begin with. We also see clouds in the western half of the Slight Risk area, and this is something that has been limiting instability so far today. Unless that cloud cover evaporates fairly quickly, I am concerned that severe weather will not be favored for Iowa, Nebraska, Missouri, and western Illinois. On the other hand, the Moderate Risk area is experiencing only sporadic cloud cover, with much of that area cloud-free. This re-assures me that severe weather is still expected today, and this is confirmed by rising instability values over that cloud-free zone.

Those in the Moderate Risk area today should prepare for the following:
• An isolated tornado or two.
• Large hail, possibly damaging to vehicles and property left outside.
• Damaging winds, potentially on a large scale, with significant damage possible in some areas.