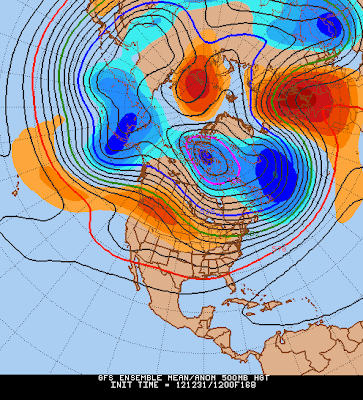 It appears that the recent storm train that has brought heavy snow to many areas of the central and east US will be shutting off for a while. An example of the forecasted situation above is shown by the GFS Ensembles, with high pressure barricading storms from moving into the US from the Pacific. This barricade should hold for the next several days before it breaks and storm chances ramp up again.

Again, this is only temporary, but it does bring a wake-up call that a continuous storm train can not and will not run on and on. At some point, the storms have to cease for a while. The worry is how long they will cease for.

Model forecasts, specifically the ECMWF, continue to show increasingly-supportive signs for a polar vortex split. The ECMWF model shows two daughter vortices emerging 10 days out, one centered over northern Eurasia, and the other centered in Canada. High pressure separates the two. That is in the lower stratosphere. In the upper stratosphere, complete collapse of the polar vortex is being forecasted, with potential vorticity forecasts coming down to values that indicate the polar vortex is no longer supported in that stratospheric level, as forecasted below:

This is the isentropic leve; 475 K forecast for PV values at Day 10. Because the millibar equivalents are not listed, I believe this level is in the mid-lower portion of the stratosphere, meaning a vortex collapse here would be more significant than a collapse in the upper stratosphere. Anyhow, this forecast shows a full split has happened with the polar vortex, and two vortices have emerged. One is in far north Canada, and the other is an elongated vortex stretching across Eurasia. The second vortex is more significant because it is the dominant vortex in this situation. However, looking at the Day 7, 8 and 9 forecasts for this same level tells me the superior vortex appears to be on a weakening trend in this forecast. The perpetrator appears to be that dark blue finger of very low PV values pressing across the North Pole. This appears to be solidifying a split of both vortices, ensuring that the polar vortex is then more prone to collapse instead of being one vortex.

This has significant implications as far as cold potential goes in January and February. The polar vortex will split, and that is the crucial step that then opens us to the potential of an overall collapse. Based on these zonal wind forecasts and PV forecasts, it looks like this split will be sticking around for a while. I am seeing potential for another warming in the next 2 weeks, but that remains to be seen.

And last but certainly not least, we need to wach the 10 millibar layer. Towards the end of the animation, you can see a sudden stratospheric warming blossom in the subcontinent of India. The angle of this warming tells me it may be trying to make a move towards the Arctic, but that certainly remains to be seen as the SSW occurs, surrounded by much below normal temperature anomalies. If this does propagate towards the Pole in the next week, late January-early February will only look colder.

In summary, my confidence is only growing in how the stratosphere will begin to buckle dramatically in the next 2-3 weeks. Model forecasts confirm my beliefs that all levels of the stratosphere will sustain heavy damage, and the upper stratosphere polar vortex looks like it will collapse. Very long range GFS model forecasts have been trending solidly with no polar vortex present in the 1mb, 2mb, 3mb and 5mb levels. The 7mb, 10mb and 20mb levels have their polar vortexes greatly displaced, and the lower stratosphere is experiencing splitting, not extreme displacement. Should this happen, the back end of winter will be cold. Not cold as in time to bring out the heavy jackets, cold as in highs in the negative digits (in places that do not usually experience such temperatures). If the vortex collapses... well, just remember what happened in January 1985:

Andrew
By Andrew at 1:39 PM 7 comments: Links to this post