Tropics Heat Back Up in Late June, Early July

After the first named storm of the 2013 Atlantic Hurricane season was also the first system to make landfall on the US Mainland this season, questions arise as to if the rest of the season will involve more landfalls and tropical cyclone formations. While my Official Outlook can address those questions, the one we're here to answer is when the next shot at tropical cyclone formation is. 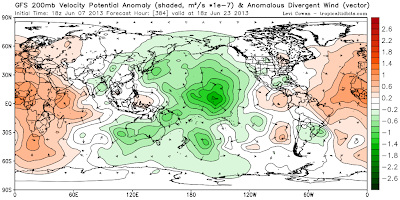 The long range GFS model has been supportive of another tropical cyclone forming in the Gulf of Mexico, proceeding to make landfall in either Texas or Mexico. This would supposedly happen in the final days of June. While the GFS has been trending with this idea, I see a much better potential coming on in the first weeks of July, as what could be a strong Madden-Julian wave makes its way eastward towards the Atlantic. Already in the Gulf of Mexico we can see some light shades of green, meaning below normal velocity potential values and thus a better chance for tropical convection to fire up in the area. If the MJO wave is able to sustain itself and shift into the Atlantic, I would not be surprised to see a solid hurricane (or multiple tropical systems) form as a result.

With a pattern still conducive to development sticking around to the end of June on the US Mainland, it is possible that the chances of tropical cyclone formation may be enhanced.