Preword: Before reading on, please disregard all past calls for a favorable pattern change and good December in recent days. Those prospects are not likely now.

I was one of the first to call for it, and now am one of many beginning to rethink calls for a pattern change. In fact, I'm outright canceling any of my hopes of a more favorable pattern after mid December, and here's why.

This is a short range forecast of the 500mb height anomalies in the atmosphere from the ECMWF Ensemble system. The current pattern has a high pressure system stuck over the Bering Sea into the western Gulf of Alaska. In response to this, we see all the cold and storminess stuck over western and central Canada, with only the Plains benefitting from this. We are also seeing high pressure systems then developing over the East and Central US regions.

Many were calling for a big pattern change around Mid December which would supposedly get us into the real winter pattern we were waiting for and had been denied of last year. Well, here's the new pattern.

This new pattern features some changes. Going back to that string idea, we how have those 'vertical structures' further south, allowing the West US and Rockies to get in on the cold and storminess. This also opens the door for an enhanced storm track over the entire nation. The Bering Sea ridge had prevented such a stormy pattern, and thanks to this new pattern, that problem is gone.

But we have another problem-- the Pacific North American index, or the PNA index.

The PNA's territory is off the West Coast and in the Northeast Pacific. In short, whatever weather happens in the West US, the opposite is observed in the East. So, if we saw a ridge of high pressure in the West, the PNA would be positive and the East would see cool and stormy weather. The negative PNA gives the storms to the West and the warmth to the East. 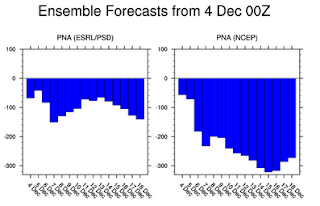 Multiple forecasts from multiple models and ensemble groups show a definitive negative PNA setting up until at least December 20th. The ECMWF Ensembles show this as well, with the blue areas of below normal pressure sitting over the West US, and suddenly we have a persistent negative PNA. The bottom two images, one being the PNA forecast from the ESRL/PSD and the other forecast from the NCEP. I feel that the NCEP forecast is actually going to turn out good on this one, and the ESRL/PSD may not be the correct forecast this time around.

And just like that, the East gets the short end of the stick, while the West benefits greatly, especially in skiing resorts.

In case anyone's wondering, the North Atlantic Oscillation (NAO) stays neutral-ish around this forecast period, not really benefitting anyone and not trying to demolish the negative PNA.

What this means for the East is that we will still see very unseasonably warm temperatures, off and on. Thanks to the cold and storms now favoring the Rockies, it is probable that these systems will push east and give the rest of the nation a break from warm weather before it gets going again. The polar vortex (a.k.a. the Arctic Oscillation (AO)) looks to be stronger than normal, and you know what that means- enhanced probabilities of warm weather, nationwide.