Latest analysis of underwater temperature anomalies in the Equatorial Pacific indicates that the El Nino is fading fast underwater.

Only two pools of warmer than normal waters exist across the Equatorial Pacific as of the latest analysis, yet another indication that this El Nino may not survive into the winter. Latest model guidance continues to trend weaker than what was being forecasted earlier, in terms of the El Nino.

Also of major interest is the presence of a very large pool of very cold temperature anomalies just about 200 meters under the waters of the El Nino. These cold anomalies have quickly strengthened in recent weeks, prompting extensive fears of the El Nino being destroyed by this. However, physics states that warm air rises and cold air sinks, and this is the same with water. Thus, the colder waters are encouraged to stay below the El Nino, but are not forced. The next several weeks will be crucial in terms of watching this cold pool do its thing.

I am tentatively keeping my prediction of a weak El Nino for the winter, but as we move through Fall, and the atmosphere continues to respond unfavorably to the El Nino, or if the cold pool grows further, the El Nino is seriously at risk for staying alive through winter.

Andrew
By Andrew at 8:24 PM 9 comments: Links to this post 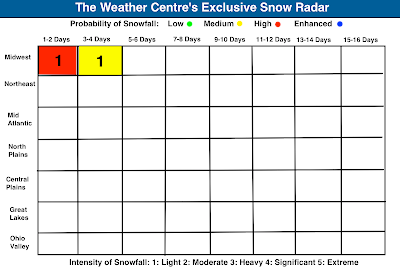 Midwest, 1-2 Days
Precipitation will combine with below-freezing surface temperatures in the lower atmosphere to create an environment possibly favorable for some falling snowflakes. Very little, if any, accumulation is expected, making the intensity rating a '1'.

Midwest, 3-4 Days
Lake effect showers in the Upper Midwest will be occurring in sub-freezing temperatures in the 850mb layer. When that layer is below freezing, the surface can be as well. However, due to the tendency of unpredictability with lake effect showers, this gets a 'Medium' confidence rating.

Today's Weather Hotspot: Midwest
The Midwest will be under the gun today, as a mess of frontal systems and disturbances creates widespread precipitation in the region. The Upper Midwest looks to be dealing with a disturbance handling a cold front, which should ignite some spotty showers and maybe a rumble of thunder. A second disturbance based in NW Missouri should produce a wider expanse of heavier precipitation in southern Illinois, western Kentucky, and southeast Missouri. The movement of a disturbance into a region where warm air has been pulled north may produce some gusty thunderstorms.

Rocky Mountains
High pressure will rest over the area, bringing sunny skies, but cold nights. Lack of cloud cover means the heat gathered during the day is released back into space, further cooling down nighttime temperatures.

Florida
A frontal system will produce scattered showers and thunderstorms in the region. Residents should be aware of the threat of storms popping up in a matter of minutes.

Northeast
A cold front intruding on a sector of warm air will produce some showers and thunderstorms, centered in western Pennsylvania and western New York. There does not look to be a big severe threat with this, but I will not rule out the gusty thunderstorm.

Northwest
Spotty showers are possible, especially closest to shore, where a disturbance moving towards the region may pop up some scattered yet brief showers.
By Andrew at 6:00 AM 1 comment: Links to this post