I'm looking at a potentially significant storm system around the April 9-13 timeframe.

The image above shows the GFS model forecast valid on April 3rd, depicting 500mb height anomalies over the western Pacific. Warm colors depict high pressure and quiet conditions, while cool colors indicate the presence of cool and stormy weather. There is a rule, well explained by Joe Renken, that states a weather phenomenon in East Asia will be reciprocated in the United States 6-10 days later. This means that if there is a storm system in Japan on a certain day, we can expect a storm in the US 6-10 days after that. The same goes for high pressure and warm weather. If we see the presence of a storm system over Japan on the evening of March 3rd, we find that we can expect a storm system in the April 9-13 period. What's more, the storm is clearly of a very strong caliber, indicating that the resultant storm in the US should be of a strong caliber as well. The Pacific North American index deals with 500mb height anomalies in the West US and into the Northeast Pacific. When we see high pressure dominating this area, we deem it to be a positive PNA. When we see storminess over the aforementioned regions, a negative PNA is in place. Looking at the forecast graphic out until about April 9-13 timeframe, we see that the PNA is projected to transition from negative to positive. If we remember that the positive Pacific North American index phase tends to enhance the risk of cold and stormy weather in the Central and East US, this adds to the potential for a pretty dynamic storm, not only in the winter sector, but the severe weather sector.

The North Atlantic Oscillation (NAO) is an index that can help us calculate the risk of wintry weather impacting the United States. When there is strong high pressure over Greenland, the NAO is said to be negative, and the jet stream buckles south to send cold air into the East US. The jet stream also bends north along the East Coast to help out the prospects for coastal storms. In positive NAO scenarios, strong low pressure dominates Greenland, leading to a mainly west-to-east jet stream, not too wavy, lowering the risk of significant cold or warm weather intrusions. We see that latest forecasts have the NAO staying negative throughout this timeframe, enhancing the risk that this storm will have a wintry component to it. Additionally, the 'wavy' jet stream may also enhance the risk for severe weather, should it arise to be a threat with this system.

Here's a map outlining my thoughts on who may be affected, based on the data presented above. 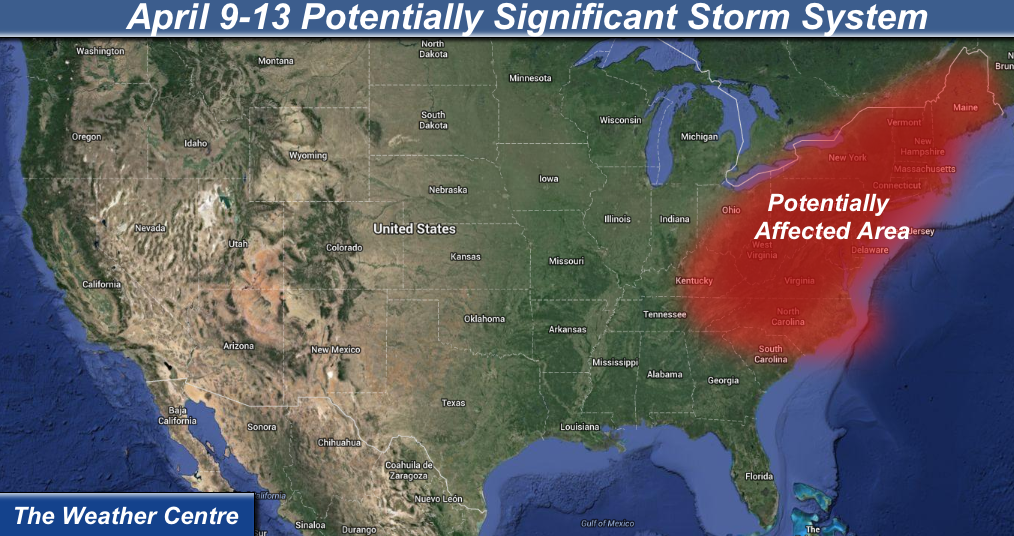 To summarize:
- There looks to be a storm in the April 9-13 period.
- Indications are this storm may be of a rather strong caliber.
- The projected atmosphere tells of an East US storm threat.

Andrew
By Andrew at 4:24 PM 2 comments: Links to this post