How Weather May Be To Blame for Some Earthquakes

Preword: This post contains information that some may find controversial. I publish this only to show the results of a study that some may find interesting, and I DO NOT intend to conclude that this is the future of earthquake prediction.  Use this post and its data with extreme caution.

For decades, there has been a struggle among geologists and meteorologists to find a cause for earthquakes that can range from a minor nuisance to lethal earth-shakers. Because of the closeness in the fields of geology and meteorology, there has been much discussion about a possible correlation between the two, possibly a correlation that could help predict earthquakes in advance. Based on a study I conducted, I believe I may have found a tool that could HELP (not completely predict) forecast the occurrence of an earthquake.

This study was composed of a total 43 'cases', in which 43 different earthquake events on the US Mainland were analyzed in magnitude, date and location. The ongoing weather situation at that time was then analyzed. 10 of these 43 cases will be shown below, and a full list of statistics on all 43 cases will then be illustrated. The image associated with each case shows vorticity values at the 500 millibar level. 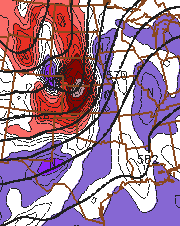 A 5.6 magnitude earthquake struck northeast Ohio at approximately 3:56 UTC. The vorticity map shown above is from 3:00 UTC. As is shown, high positive vorticity values were approaching the Oklahoma area at the time of the observed earthquake, with two areas of strong low pressure seen in the central and northern Plains in association with this area of high vorticity. 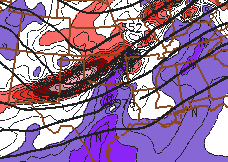 A 4.7 magnitude earthquake struck Arkansas at approximately 5:01 UTC. This map shown above is from 6:00 UTC. At the time of the earthquake, significant positive vorticity values were observed approaching the state of Arkansas from northern Texas and western Oklahoma. 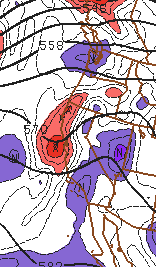 A 6.5 magnitude earthquake struck the waters just a few miles offshore northern California at approximately 00:27 UTC. This vorticity map shown above is from 00:00 UTC. As is shown above, a lobe of elevated vorticity is shown offshore the west coast of Colorado, with a small area of higher vorticity immediately close to the northern California coast where the earthquake occurred. In similar stature to the previous two cases, high positive vorticity values were observed in the immediate vicinity of this earthquake. 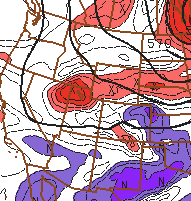 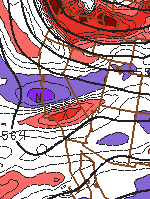 A 3.5 magnitude earthquake struck the San Francisco Bay Area at approximately 14:47 UTC. This vorticity map is from 15:00 UTC. As is shown above, an area of elevated vorticity was observed over the site of the earthquake, with an area of opposing negative vorticity close behind the positive vorticity swath. 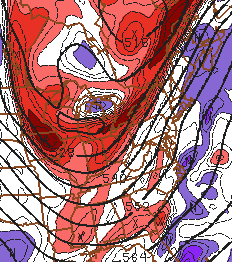 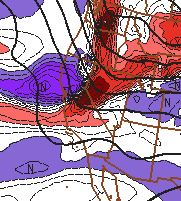 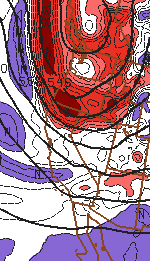 A 5.4 magnitude earthquake struck northern California at approximately 3:03 UTC. This vorticity map is from 3:00 UTC. As is shown above, a large area of positive vorticity is seen over the area where the earthquake occurred. 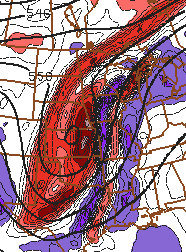 The following statistics cover all 43 cases, including the 10 listed above. For the statistics listing 'Supports study' or 'Does not support study', the theory is that anomalous vorticity values may be the cause of some earthquakes. This theory was then matched against 43 of the most recent US Mainland earthquakes.

More than half of the cases in this study favor the proposition that anomalous vorticity values either over or in the immediate vicinity of the earthquake may be the cause behind this earthquake. While the percentages of supporting the study/not supporting the study are still rather even (60% favor to 40% non-favor), this could be the first evidence that indicates weather may be a factor in some earthquakes.
By Andrew at 1:51 PM 1 comment: Links to this post

QBO May Stay Positive This Winter

There are indications that the Quasi-Biennial Oscillation (QBO) may stay positive for the winter of 2013-2014.

The chart above, from the University at Albany's Mike Ventrice, shows the observed Quasi-Biennial Oscillation anomalies from July 2009 to the current time. Looking towards the far right end of the chart we see that the QBO is beginning to turn positive at this point in time. This positive turn comes after almost a year of consistent negative QBO anomalies. By just looking at the chart, you can see why an entire year had a negative QBO intact- the previous positive QBO event was very weak when compared to the strength of the two negative QBO events shown on the chart.

This image, from the Institute of Meteorology in Berlin, also shows the history of the Quasi-Biennial Oscillation over the past few years. However, this time, the positive (gray color) and negative (white color) anomalies are shown as they propagate downwards from the top of the stratosphere. If you take a look to the legend on the left side of the image, you see numbers from 10 to 100. 10 hPa is the upper stratosphere, while 100 hPa is defined as the lower stratosphere. These benchmark hPa numbers are traced in dashed lines across the entire image to show when a positive or negative QBO event reaches a certain hPa level of the stratosphere.

Looking to the present time on the above image, we can see that the first positive QBO event in some time is working its way down the stratosphere. It is currently making its way down towards the 50 hPa dashed line after already passing the upper stratosphere layers. Once again, we see the contour number '10' within that gray swath illustrating the positive QBO. At first glance, this +QBO event looks pretty well structured at this point, meaning that contoured '10' area does not look too ragged at this point. However, if you really want a negative QBO this winter and want to over-analyze this positive QBO wave, take a look at the most recent values of the positive QBO. If you look closely, you can see how the '10' contour drops off right before the most recent observation. Could that be a sign of the +QBO weakening? We'll have to wait and see.

But, if we are going to have a positive QBO this winter, what should we expect? 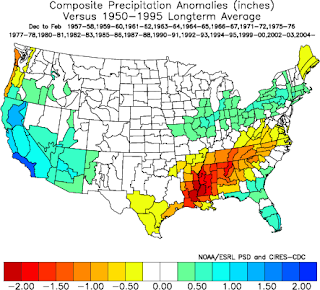 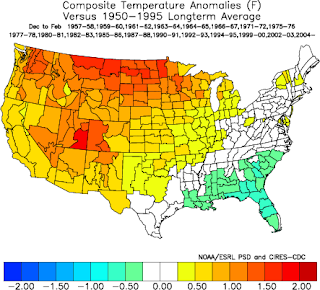 The big story about the positive QBO is how it allows above-normal temperatures to arise. Just about everyone west of the Mississippi River is in line for above normal temperatures during a positive QBO. It appears the Northern Plains would get the warmest of the warmth. The Northeast and Mid-Atlantic wouldn't be affected too much, while the Southeast US would be the only part of the nation to get in on below-normal temperatures. Bear in mind all of this would only happen if the positive QBO was the sole factor in deciding the winter ahead, and we know that such a scenario is just not possible. Nevertheless, if we do get a positive QBO winter this winter, climatologically, these two images above could help us figure out the upcoming cold season.

Andrew
By Andrew at 12:18 PM No comments: Links to this post