There continues to be a large spread amongst the forecasting models as far as which solution is the most likely to verify. Shown above is the North American Ensemble Forecasting System, or NAEFS forecast for Hour 96, which converts to 4 days away from today. We see our system is in Kentucky at this time. If you've been reading my recent posts, you will understand that there has been a north trend with this storm that some models have had. This trend then resulted in the storm going to Wisconsin and other areas in the Northern Plains/Upper Midwest. It has been within the last 48 hours that we have seen a sudden revolt, so to speak, among the ensemble systems. This includes the NAEFS, the Canadian ensemble system and the American ensemble system. All three are considered big ensemble forecasting systems and have all been in fascinating agreement with the system going south rather than north.

So why is there so much confusion? Well, shown above is the NAEFS 500 millibar height anomaly forecast for 3 days away. Colder colors correspond to low pressure systems, while warm colors are supportive of high pressure systems. The model disagreement appears to stem from how strong high pressure in the Central and East US will be. The high pressure originates from persistent low pressure in the West US. As a result of below normal heights in the West, there must be above normal heights in the East US, as Newton's Third Law of Motion would indicate. These lower heights in the West and higher heights in the East are called the negative Pacific North American index, or negative PNA. In the negative PNA, storm systems that form in the Southwest as a result of persistent low pressure in that area are forced north into the Northern Plains, due to high pressure formation in the Southeast US. The models are catching onto this idea, but why are the ensembles going south? One reason is the presence of high pressure to the east of Greenland, called an east-based negative North Atlantic Oscillation. You can probably guess why the East based negative NAO is called east-based, but the negative NAO implies high pressure is over Greenland. This high pressure then acts to strengthen the subtropical jet stream, which is essentially another jet stream that sits along the Gulf Coast and Southern US rather than the North US (which is the big time jet stream). The subtropical jet stream, which is also called the STJ, is strengthened in a negative NAO. This negative NAO also acts to suppress the Southeast Ridge of high pressure, which would then act to verify the ensembles prediction of the storm sticking to the south.

Now that we've identified the indices at play here, let's look over that 500mb anomaly map and identify why the models are not handling this well. In that image, we can see high pressure centered over Canada and stretching into the US. This stretch into the US is helped by the negative PNA. By Hour 72 (when this image is valid), the high pressure system has started to extend north, leaving a gap of high pressure in the Southeast that is weaker than the high pressure in the Upper Midwest. Some models, like the European model, want to take this system north and have it ride the stronger high pressure wave into the Upper Midwest. The ensembles seem to believe it will go towards the weaker area of high pressure and this take a more southern route. The logical solution would be to take this system to the south, towards the weaker area of high pressure, as the ensembles are showing. I can understand why the models want to take the system more into the Upper Midwest, and it's due to where the system ejects from the Rockies. The farther north it comes out of the mountains, the farther north the track is going to be. Likewise, the further south the system ejects from the Rockies, the further south the storm track will be, like the ensembles are forecasting. In my personal opinion, if the system will be moving out of the Rockies from Southeast Colorado and the jet stream will be flowing towards the northeast (with winds over 100 knots), I could see the Northern track work out. 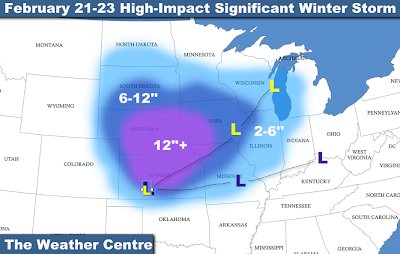 I combined both possible storm tracks in the image, with the yellow 'L's illustrating the north track and purple 'L's showing the southern storm track. Amounts were put at a wide spread of 2-6 inches for those in the light blue. Most should reach the middle of that spread, while some closer to the dark blue will flirt with the half foot mark. The dark blue contains an even wider spread of 6 to 12 inches. The wide-ness of the forecast spread is due to how low confidence still remains. The system is not yet onshore; we still have another day or two before the system makes landfall on the US. The pink shows amounts surpassing one foot. Southeast NE and north KS will bear the brunt of the system if either track succeeds.