Keep in mind these are not forecasts. I am showing them to display current model guidance as to what the state of the El Nino-Southern Oscillation may be in or around the next winter season. 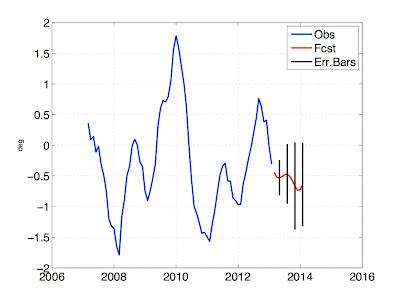 We will start with the forecasted ENSO conditions from UCLA. This model was updated in mid February, and its forecast goes into the beginning of 2014. We see that this model is forecasting a drop into La Nina conditions during the summer and fall of 2013, with a full-fledged La Nina in the winter of 2013-2014. The presence of a La Nina, marked by cooler than normal waters in the Equatorial Pacific, means snowfall and precipitation is enhanced in the Midwest and Ohio Valley during the wintertime. The error bars, shown in black and depicting how far off the end result may be in comparison to this forecast, only goes as high as neutral territory (0.0) and as low as -1.4, which means medium to strong La Nina conditions would be present across the globe.

The next model we will look at is a statistical model, meaning it uses past conditions to forecast the future ENSO phase. As of late, the statistical models have been beating their dynamical model counterparts, which run on using current conditions and forecasting the future, not accounting for the past. This model is called the Markov model, and it shows three frames- March to May, June to August and September to November. The Markov model is showing a solid La Nina going into the late fall/early winter months of 2013. This forecast is similar to the UCLA model, in that they both are projecting a La Nina going into the winter. However, something I failed to mention was that the Equatorial Pacific is currently undergoing strong below-surface warming that appears to be demolishing the weak La Nina that was recently in place. Should this warming persist, we could see a warmer (neutral or El Nino) forecast than what is being displayed here. 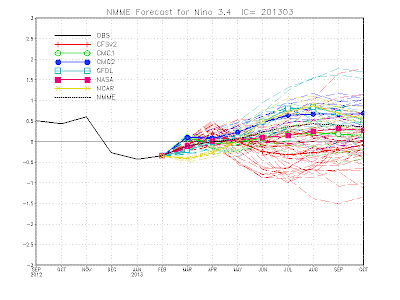 Now shown above is a compilation of different models and their ensembles, forecasting until October 2013. While the image does look like a big, sloppy mess, we can get the gist of a few key items. For example, the actual models in solid lines appear to favor an El Nino going into the fall of 2013. This is going against the statistical model forecasts of an El Nino for the fall of 2013. The majority of ensemble members also appear to favor neutral to slight El Nino conditions for the fall of 2013. Considering the recent surge of underwater warming over the Equatorial Pacific, I cannot say this solution is far-fetched. I find it to be a very plausible idea, but until we are at least several months closer to the next winter season, I cannot confidently put in my idea on which forecast solution may be correct.

The last forecast is the CLIPER statistical model. The reason I am using so many statistical models is because many dynamical models, such as the image immediately above the CLIPER forecast, do not go out into late fall or winter- many statistical models do. We see five panels in the above image, but all we really want to focus on is the second panel down, the one labeled Nino 3.4. We see that the forecast calls for a La Nina through the rest of 2013 and into winter 2013-2014. This falls well in line with other statistical model forecasts. As I said above, the statistical models use past data to forecast the future, meaning their forecasts can be considered more accurate when looking at the aspect of analogs. However, dynamical models can also be considered superior when you account for the additional computer power and expertise put into those models. All in all, it's a tough forecast that we still need many months to redefine and re-examine. 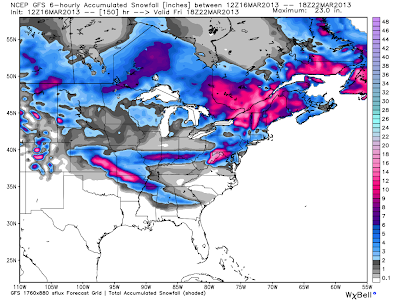 The latest run of the American GFS model is forecasting a snow event on the Gulf Coast, with upwards of 2 inches possibly falling in central Georgia and Alabama.

Past forecasts of the American model have had this snow hitting Tennessee and Kentucky rather than the Gulf Coast, but as we approach the timeframe when the models begin to align, more attention must be given to solutions like this. It appears that a rogue piece of energy may have the right ingredients to drop only a few inches of snow anywhere from Tennessee to the Gulf Coast. Because we are over 5 days away, additional movement of this projected snowfall is expected. It is possible the snow may not even fall. However, I feel that with the atmospheric pattern favoring storms being suppressed further to the south this sort of solution may not be so out of the realm of possibility. In my eyes, it is certainly something to watch. 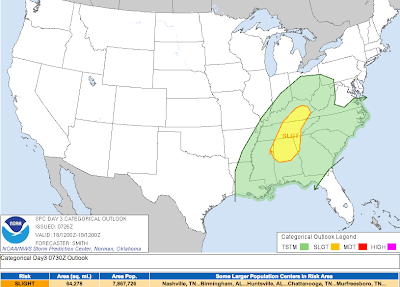 There is still potential for severe weather on Monday, March 18.

According to the above Storm Prediction Center outlook, a slight risk of severe weather exists from central Kentucky into Tennessee and the northern half of Alabama. This risk covers over 60,000 square miles and just under 8 million people. Large cities such as Nashville, Birmingham, and Chattanooga are under the gun for this severe weather risk.

Latest high resolution model forecasts have a mess of rain and snow covering Indiana, Ohio, Illinois and other areas near Kentucky. Shortly after this mess departs, a complex of severe thunderstorms appears to be forming in the early morning hours over the region delineated above. Composite reflectivities show this complex to be scattered yet organized. It looks like this complex will have a threat for all types of severe weather, but the lack of individual supercells lowers the tornado threat modestly.