The global model ensembles are taking a shift west, posing a danger to cities like New Orleans, that were previously not in the path of Isaac. Let's take a look. 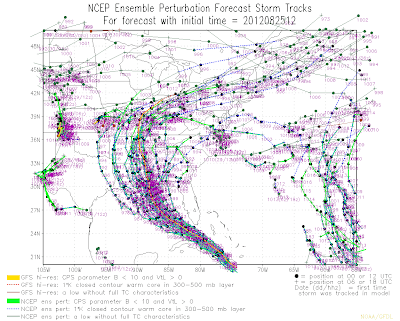 This is the NCEP Ensembles, comprised of the GFS Ensembles. In the previous 0z suite, we saw a good consensus on Isaac hitting the Florida Panhandle. However, notice the ensemble members now more spred out. This spread appears to be favoring the west more than the east, and the 12z model suite reflected a westward shift in thinking. I'm not saying that the one member showing a Houston, Texas landfall is correct, but a westward shift is certainly something to take note of, especially on such a large scale of models and ensembles. 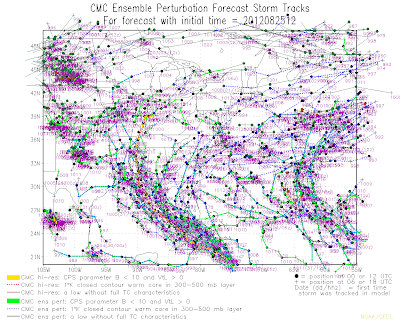 This is the CMC Ensemble group. These members are depicting a situation similar to that of the NCEP Ensembles, but more biased towards a MS/AL landfall. This is going along with new model thinking, and is not such a bad idea. However, there remains a considerable amount of spread among the ensembles, which can be mediocre at times, to say the best. However, this time around, the CMC ENS. may have something going for them. 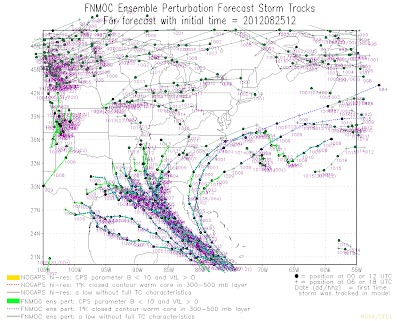 Next, we have the FNMOC Ensembles. The FNMOC Ensembles are based off of the NOGAPS Model, which is from the Navy. The FNMOC ENS. are showing a much more varied, yet arguably well-composed spread, with members stretched from the Florida Panhandle to southern Texas. What I find great about this run of the FNMOC Ensembles is that it is accounting for nearly every reasonable scenario out there. Given, Isaac will likely not hit Mexico/South Texas. However, the FNMOC members are covering ground from Houston to Tallahassee, which is encompassing recent model and ensemble trends. This will be one to watch.

Lastly, the ECMWF Ensembles. Because the institute that runs the ECMWF is so strict about releasing data to the public for free, we are only able to see a mean of the ensembles, this image courtesy of Americanwx. The mean ensembles show a system making landfall in western Florida. This is a nudge to the east of ensemble thinking above, but should very well be counted in, as it was great at indicating that Isaac would be a Gulf threat.

All in all, the latest ensemble runs have been very interesting. Strangely, I am hesitant to count out any of them, for each has its own distinct trait that I find crucial in this forecast. For example, the NCEP has an ensemble group that has shifted with the models, the GEM Ensembles keep the MS/AL landfall as a consensus, and the FNMOC Ensembles account for all reasonable possibilities. This is not a common thing to see, when each group has good things going for them like this.

The question is, will a disturbance moving off the East Coast pick up Isaac?

I have marked the trough moving offshore and Isaac making landfall. The models seem to be having trouble assuming whether the trough influences Isaac and pulls it north, or does not influence Isaac and the hurricane goes west, more towards Louisiana, like the ensembles were beginning to say.

I will make a better calculation on this in the morning, when the ensembles should be a bit more settled than now.

Andrew
By Andrew at 6:05 PM No comments:

Watches and warnings line the northern Caribbean and eastern Gulf Coast this morning, as Isaac leaves Haiti to continue towards the Gulf of Mexico.

Hurricane warnings have been hoisted in the face of Isaac in Florida, as well as tropical storm warnings blanketing Cuba. Isaac has just moved off of Haiti and appears to be heading northwest, towards the Florida Keys and the Gulf of Mexico.
If Isaac makes landfall on Cuba, it appears to be brief, and only a slight change in storm strength would likely be observed. However, if Isaac plows into Cuba, which is unlikely, the tropical storm could have issues with keeping itself together.

The latest Advanced Dvorak Technique (ADT) placement of the center puts Isaac at about 19 N longitude and 74 W latitude. This indicates Isaac has been moving northwest in the past while, but the first NHC graphic appears to show a west-northwest tilt as of the current center.
From this viewpoint, it seems a brief landfall on Cuba is likely, but nothing major as far as going through much of the country.

The forecast from the National Hurricane Center takes Isaac on a northwest path into the Florida Keys before curving north and making landfall on the Florida Panhandle. This does appear to be a fair track, but any wobble in any direction could drastically change the outcome of the track of Isaac. I am looking for hurricane warnings to be spread out across western Florida, the Panhandle, and Mississippi's into Alabama's portions of the Gulf Coast when Isaac nears. 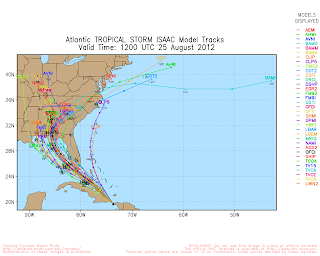 The spread of models appears to be wanting to take Isaac a bit further west, possibly into Alabama or the extreme western Florida Panhandle. Considering the Southern US has been launching special radiosondes at 6z and 18z to aid the models in tracking Isaac, I would expect this to be a good consensus. However, it looks like a few models remain unsure, even 24 hours out, on where Isaac will be. 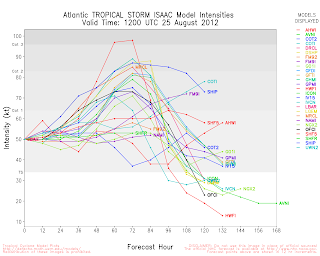 Intensity forecasts are also very scattered, but seem to have an idea of Category 1 hurricane strength in the next 3-4 days, before making landfall and weakening and possibly degenerating into an extratropical low. After that, some models project Isaac will shoot out to sea. 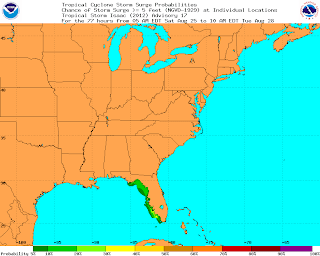 Storm surge is a big concern. The NHC is projecting that there is anywhere from a 0-30% chance of storm surge levels reaching 5 feet in Florida. The values appear to be so low because of no clear model consensus, but this remains a threat either way. Such a large storm has the potential to produce a very large storm surge area, possibly well inland of western Florida.