Of course, these dates will be brought up over the course of the summer and early fall: this will not be the only time the release dates are published & talked about. Hope to see you there! 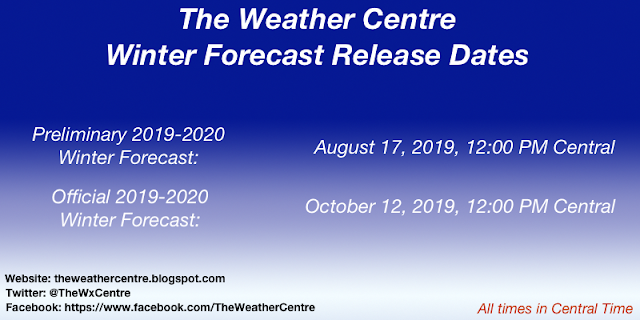 The emergence of a strong positive-QBO state in the stratosphere in recent months looks set to persist into the coming winter, with a likelihood of a stronger-than-normal stratospheric polar vortex as a consequence. This, of course, will feed into the broader winter outlook for the United States as a result. Click any image to enlarge it.

As a side note, thank you to all of those who sent well-wishes for my wisdom teeth surgery the other day! The surgery went very smoothly and the recovery has been remarkably painless, which lets me get back to writing these posts quicker!

Of course, before we dive into the juicy stuff, we need to first briefly review what the QBO phenomenon is.

Let's take a look at the recent history of the QBO to see what we're working with heading into the summer and fall months.

The QBO is readily seen in this time-series view of stratospheric wind values and directions over the Equator, with the positive phases of the oscillation laid out in gray shading and the negative phase shown in white shading.

I've annotated this image to point out the recent emergence of westerlies over the Equator, displayed on the screenshot by the swath of gray shading and positive contour values. As of the latest observations, the westerlies had propagated down to about the 70-millibar level over the Equator, meaning this wave of westerly winds is well on its way and we are firmly entrenched in a positive QBO regime.

Of course, this has notable implications for the coming winter. As this blog has discussed extensively in previous winters, the stratosphere can be used to glean extensive information about the broader forecast, whether on a scale of days or months. In this case, to identify what a positive QBO winter may entail (holding all else equal, of course), I've gone through the Climate Prediction Center's 30-millibar dataset of equatorial stratospheric wind speeds and direction and sorted each calendar month in a descending order. Then, for the three primary winter months (December, January and February), I pulled the years of the five strongest positive QBO values for each month. Given that the QBO is a prolonged oscillation (whereas something like the North Atlantic Oscillation changes in a matter of days), this method pulled out only eight distinct winters. I then created composite images of different atmospheric variables during the winter months for these eight years to give an idea of what a positive QBO environment generally entails.

First, let's see what a 'typical' positive QBO brings in terms of the Northern Hemisphere's stratosphere.

Creating this composite image confirms the explanation given to what happens in a positive QBO environment: the stratospheric polar vortex in the Northern Hemisphere strengthens. Indeed, the strong negative anomalies centered over the Arctic Circle in this composite show the enhanced westerlies providing strength to the polar vortex, thereby keeping the cold air locked up in the Arctic. It's no wonder that those who enjoy winter weather are firmly in favor of the negative phase of the QBO!

Next, I took these same years but changed the height level of the atmosphere from 50 millibars to 500 millibars.

The story isn't too different when moving down to the 500-millibar level, which is where meteorologists look to identify the features that more directly impact you and me. For example, warmer colors on this map illustrate ridges of high pressure, while cooler colors identify low pressure areas. Given the stronger polar vortex, it's therefore not a surprise to see a swath of below-normal height anomalies extending from Greenland into Canada, symptomatic of a relatively-stronger tropospheric polar vortex.

I do want to briefly discuss another feature here, however, and that's the extreme positive height anomalies in the Bering Sea. A sharp-eyed weather enthusiast may recognize that swath of well-above-normal geopotential heights as an almost-textbook negative phase of the West Pacific Oscillation, or WPO. In contrast to the QBO, which records changes in terms of months, the WPO changes on a daily basis, making it more useful for daily & weekly forecasts as opposed to seasonal forecasts. Still, this is important, and especially-so for fans of winter weather.

The composite image above shows what typically happens when the WPO is positive, so for our discussion of the *negative* phase, simply view the anomalies as opposite for a rough idea of what a negative WPO entails. All else equal, the negative phase of the West Pacific Oscillation involves a strong ridge over the Bering Sea, like what was shown in the positive-QBO composite image right above this. That strong ridge tends to try and force itself further north into the Arctic Circle, which then pushes the jet stream further north. As a consequence, downstream of that ridge, a trough over Canada is coerced into shifting south and even a little west, not dissimilar to what the positive-QBO composite image shows with negative anomalies in southwest Canada extending into the Pacific Northwest. This then can encourage a ridge to build in the eastern U.S., however, which prohibits the cold air from making it too far east.

In other words, the positive phase of the QBO tends to create a strong ridge in the Bering Sea, holding all other variables equal, in a pattern that is then classified as the negative phase of the WPO. These two oscillations may be different in definition but their impact on the contiguous United States is similar: colder and stormier weather in the West U.S., the potential for a ridge in the eastern or southeastern U.S., and the threat for storm systems to ride the jet stream northeast across the Plains into the Midwest and Great Lakes.

Let's see if that explanation holds up to the 'typical' surface temperature anomalies in a positive QBO event.

The surface temperature anomalies in positive-QBO environments does seem to match up with what was described immediately prior. In these winters with a positive QBO, colder than normal temperatures are more predominant in the northern third of the country, maximized in the North Plains and northern Rockies into western Canada. Conversely, warmer-than-normal temperature anomalies tend to be more likely in the southern third of the country, with a particular preference for warmer temperatures along the East Coast as that ridge I mentioned seems to try and make an appearance.

Just to push the point home a bit more, above is a composite image of vector wind anomalies over North America at the 250-millibar level (roughly the jet stream) for those eight positive-QBO winters. In other words, this gives an idea of how the jet stream is oriented during winters with a positive QBO, all else equal.

In a positive QBO winter, we tend to see the strong ridge over the Bering Sea force the Pacific jet stream to the north, as previously discussed, before it buckles south as it crashes into North America. From there, things get a little tricky. It seems plausible that the jet stream oriented in this fashion wouldn't be sufficient enough to pull storm systems into the Southwest (not as an overarching theme, at least), but would be sufficient to likely come onshore somewhere in northern California or Oregon and then ride a rather-zonal path to the east before turning northeast somewhere over the Plains. This kind of storm track would keep the Northern Plains most pointedly under the gun for winter weather threats, but the hint of a subtropical jet stream along the Gulf Coast suggests this storm track would not necessarily be the only track. That's a positive thing for those in the East U.S. who are hoping for a snowy winter.

To Summarize:
- The Quasi-Biennial Oscillation (QBO) is currently in its positive phase, and is likely to remain this way into the coming winter.
- Typically, a positive-QBO winter brings cooler than normal conditions to the northern third of the country and warmer conditions to the southern third and East Coast.
- A positive QBO also seems prone to supporting a negative-WPO state.
- Most importantly, however, a positive QBO supports a stronger stratospheric polar vortex, which restricts the flow of cold air to lower latitudes.
- As such, a positive QBO this winter may temper the likelihood of colder than normal conditions for the United States as a whole.