This is the February 20-23 Winter Storm Analysis.
A winter storm is projected to occur throughout the Plains, Midwest and Great Lakes. There are many key differences in forecasts of what the exact track should be and what type of precipitation will occur in these areas.
So let's start out with where the storm currently is. Below, we have a current image of the energy over the Pacific Ocean off the coast of California.

That big swirl of energy and moisture over Alaska and the Pacific Ocean is our expected storm. I do expect all that moisture to move over into California, strengthen as it begins to move along east, then trek into the Midwest and Great Lakes.
While the Computer Models haven't been handling this storm too well, the GFS ensembles have an image below of the 72 hour precipitation as per the 0z model run.

We definitely see heavy areas of precipitation over the Plains back through the Midwest and Great Lakes. Below are a couple images of the latest run of the GFS model depicting this storm.

Below is the first image. We see the strong low pressure creating heavy precipitation over the Great Lakes, with moderate precipitation dominant over the Plains. The hole to the west-southwest of the low pressure is the dry slot. Keep an eye on that.

About 6 hours later, the low pressure has moved northward, dragging the dry slot eastward. The precipitation is now moderate in the Great Lakes, Plains and Ohio Valley. The blue line right above the low pressure is the rain/snow line. Anyone above the first blue line gets snow. Anyone below it gets rain, typically.

Six more hours later, the low pressure is moving east. Moderate precipitation has turned light across the Upper Plains, with moderate-heavy precipitation ending as well in the Upper Midwest. Attention then turns to the Ohio Valley, where heavy precipitation is dominant.
Snow is the last thing people want across the North after this warm-up. But, to get a feel for how much snow areas may get, below is current snow cover. 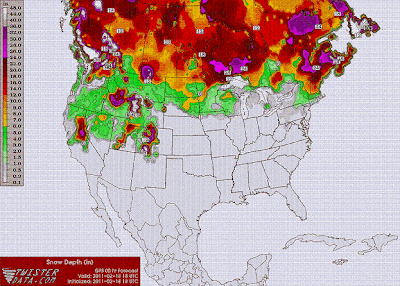 All that snow from the Blizzard of 2011 is gone over the Chicago area, with small snow cover in left from the storm that collapsed the Metrodome. Now, compare this current snow cover with the projected snow cover from the 12z run after this storm. 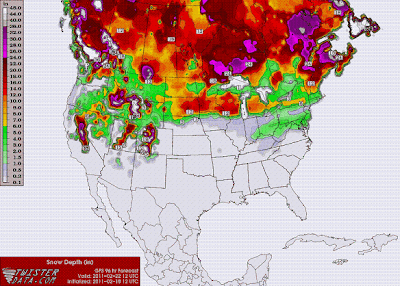 Here, we see a big change as large snowfall totals are evident in the Wisconsin, Minnesota and Upper Plains areas. This is expected to be a big storm.
The Weather Centre will not have SnowCASTs or IceCASTs available for the next couple of days until the models settle out.
By Andrew at 3:37 PM No comments: Links to this post

Right now, we're watching high pressure move into place across the Great Lakes and Midwest, where we'll see sunny skies. However, with that high pressure comes windy conditions as the pressure lines are so close together up in the atmosphere.
The main concern right now in the forecast is a low pressure system forecast to come and cross somewhere in our forecast area.
Right now, however, the moisture and energy that will eventually give birth to this low pressure system is offshore. The Weather Centre expects the low pressure system to come onshore sometime this weekend into Monday.
At this time, the computer models aren't in a good agreement with this storm. However, 3 models are suggesting a general track where the low would slice through North Illinois, or the IL/WI border.
The Weather Centre already posted a graphic on this storm about 2 days ago, and that still stands.
For the weather enthusiast, maps and graphs will be posted as this storm nears.
For the person who just wants the forecast, you may look on the Current Weather Page.
By Andrew at 3:22 PM No comments: Links to this post

The SREF, which handles storms about 24 hours out very well, has made a general consensus that a central IL track is preferred. This image is the latest as of 12z.
By Andrew at 10:56 AM No comments: Links to this post

The NAM has moved south. The first image is the 6z image, while the latter image is the latest run (12z). Notice how the system went southward.
By Andrew at 10:54 AM No comments: Links to this post 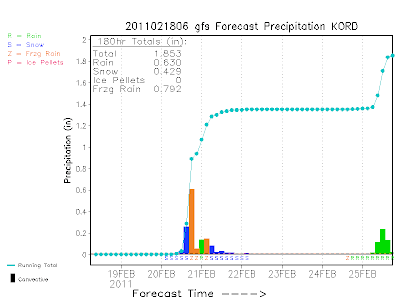 Note the FREEZING RAIN accumulation of .8 inches in Chicago.
By Andrew at 10:28 AM No comments: Links to this post

When the NAO is negative, a winter storm is typically forecast for the Midwest area
By Andrew at 10:17 AM No comments: Links to this post

This is an image of the 00z accumulated average precip. for the 72 hour period for the upcoming storm Feb. 20-23

I know I have been silent as I look at information, but I have decided that is not fair, and you should know what I know.
At this time, the 00z ECMWF model took the low across Iowa, then dipped southeast into Central IL. People in Chicago and Madison would be in the line for rain or sleet as the thickness line sits in Central Wisconsin, but with the 5410 line (5400 is the freezing point) way down south, I believe rain will not be the dominant feature if the ECMWF has its way.
The 06z GFS model has a low move across the WI/IL border. However, it is weaker than other models and eventually takes a funny turn south.
The 00z NOGAPS Model was looking to take a very southern track, when the low projected on NOGAPS suddenly stopped. The energy appeared to continue forward, however. In that time frame, the rain/snow line was on the Wisconsin Illinois border. Chicago would likely receive freezing rain or sleet, while Madison, WI would receive snow and mixed sleet. Later in the model run, the low pressure, seemingly weaker, began to trek across Central Illinois. However, the rain/snow line was now in line with the south tip of Lake Michigan. The low pressure still had abundant precipitation. Chicago would receive snow with mixed sleet and Madison would receive all snow if this situation panned out.
The 00z CMC (GEM) Model had the low pressure move along South Wisconsin with the thickness line right against the low.The low also appeared much faster, so less precipitation would fall.
Conclusion: The GFS is a model that may significantly change. In the meanwhile,the other models will battle for supremacy.
By Andrew at 8:21 AM No comments: Links to this post