There is potential (key word potential) for a winter storm from the perspective of a weather model. Let's take a closer look. 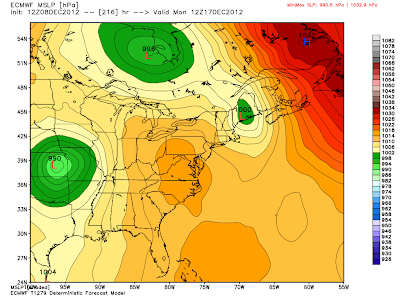 This is the Hour 216 (9 day) forecast from the European ECMWF model. Displayed above are values of sea level pressure (SLP)- lower values (cool colors) show storm systems, higher values (warmer colors) show quieter and warmer weather. The forecast above calls for a strong storm system to be present in the Plains, with a minimum central pressure of 990 millibars. That is pretty strong, and if enough cold air is available in Canada, a snow event could be possible in the north Plains. 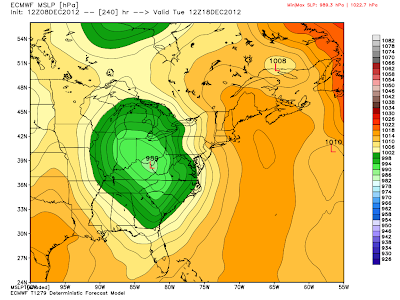 The last forecast image from the ECMWF is hour 240, or 10 days away, We now see our storm system has further strengthened into a low pressure system with a minimum central pressure of 989 millibars. There is more to this than just a three-digit number. Notice the extension of light green colors to the northwest and southeast. The reason why this is significant is because it means that the system is being stretched, possibly into two systems. One system would likely go northeast into southern Canada, and the second system would probably head east and up the coast. But that's only IF it separated into 2 systems, and this is 10 DAYS OUT.

Adding even more uncertainty to the mix is the lack of support from the American GFS model. Usually, the GFS and ECMWF are on the same page, but if one model does not support the other, confidence is drastically reduced.

This is an article concerning the potential for a major winter storm from December 14-16. 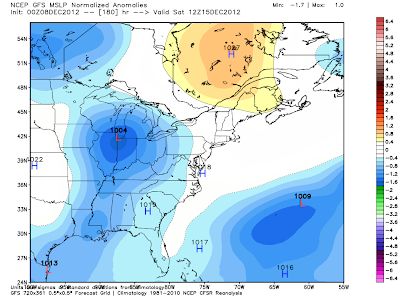 We are going to go through all of the last 4 American GFS model forecast runs. They include the 0z (oldest forecast), the 6z (second-oldest forecast), the 12z (second newest forecast) and the 18z (newest forecast) model runs. The above image is the sea level pressure (SLP) anomaly for December 15th, from the 0z model forecast, meaning this is the oldest forecast. As you can see, there is a dark blue area across the Midwest, and that little 'L' shows the center of this low pressure system as 1004 millibars- not that strong. I don't have much to say about this forecast except to say watch the change from the 0z forecast to the next 3 runs of the GFS. 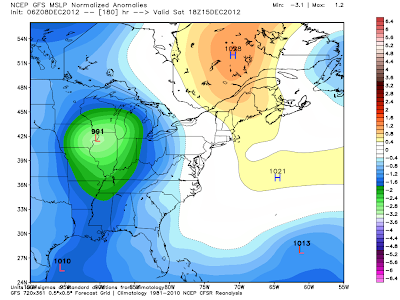 Now, on this 6z model forecast (second-oldest forecast) of the GFS, valid for the afternoon of December 15th, we now see a sudden color change. Instead of a small area of dark blue, there is now a deep protrusion of light greens. These cooler colors show a deeper than normal SLP anomaly. Now, that 'L' in the above image shows our low pressure system with a 991 millibar reading- a substantial increase in strength from our 0z run. 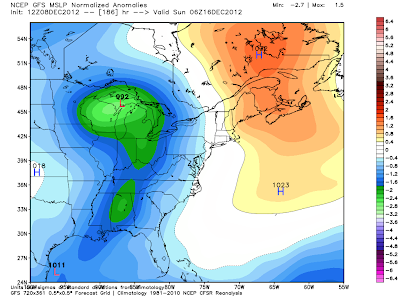 This forecast image from the second-newest forecast from the 12z GFS, valid in the morning of December 16th, shows our low pressure system is still around, but is now further north than previous runs have shown. We are still finding dark green anomalies in the Upper Midwest, and the storm system is only 1 millibar weaker than the 6z run, with a strength of 992mb. At this point, also notice the expanded dark blue and green colors to the south. This means that the GFS is toying with the idea of possibly another low pressure system developing in the South, possibly eventually moving up the East Coast, but I caution you- this possible event is still over 5 days away.

We've seen the last 4 American GFS models, which have fair consistency in having a disturbance in the area in this timeframe. The track is the big unknown factor. Now, we turn to the slightly more reliable European ECMWF model.

This forecast of the ECMWF model shows SLP values, not anomalies, hence the color change. We see our developing low pressure system out in the eastern Plains on the morning of December 15th in this forecast. The system is already at an alarming 990 millibars, leading me to question how strong this system could get if it strengthens further in the Midwest- a very plausible idea. Note the high pressure system in the Northeast and off the Mid Atlantic coast. This tells me that the storm will take a track more to the northeast than to the direct east.

As expected, the system takes a more northeast turn for the morning of December 16th, but the system has not strengthened, nor has it weakened. Its central pressure remains at 990 millibars, something I don't believe will happen in the end. Then again, this forecast is unlikely to happen precisely. Some parts may happen, others won't, we just don't know.

In summary, the two most reliable models in the world are seeing this potential for a possibly major winter storm hitting the Lower 48. At the moment, I am leaning towards a Plains track, due to the likelihood of the negative PNA persisting (which favors storms going into the Plains). However, I would watch that spin-off low pressure possibility I mentioned with the GFS, as a negative NAO could easily take such a system and hammer the Northeast.

But, as I always say, WE'RE STILL A LONG WAYS OUT.

Andrew
By Andrew at 8:04 PM 9 comments: Links to this post

I am watching the potential for a significant New Year's Day storm system. You might think this is ridiculous, but let me explain why there is a fair chance this could happen.

Above, we see the 96 hour 500mb forecast from the Ocean Prediction Center, for the North Pacific. There are three storm systems here, all very strong as seen above. They are all going to be in the Bering Sea beginning on December 11, so we'll use that day as the starting date.

If we take that day of December 11, and take it out 18-21 days, we find ourselves between the days of December 29 and January 1- the days in the immediate vicinity of New Year's Day. If it takes these three systems a bit more time to move into the Bering Sea, we could see New Year's Day in the middle of this timeframe.

ALL FORECASTS WILL BE RELEASED ON DECEMBER 9, 2012.

All times in Central time.
All states in abbreviations.