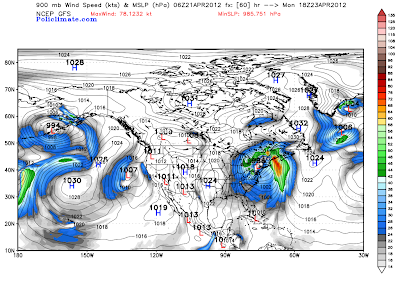 A strong storm system is forecast to put down up to 30 inches of snow in western New York in the next few days. The image above portrays the storm system superimposed with 900mb wind speeds. These can show just how strong the storm system is. Below is the SREF snowfall forecast for Jamestown Airport, New York. 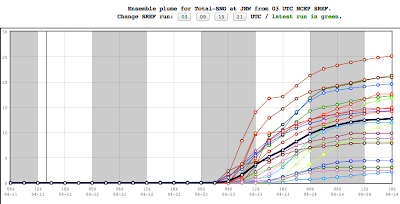 While many members are indicating snow to be somewhere in the 10-20 inch range, a few select members are choosing to go 20-30 inches. However, with every high end there is a low end, and this low end totals 1-5 inches as a storm total.
I am thinking that, with the ratios of snow being so low, and the storm system being so strong, that this will likely even out to a good 10-17 inch total for the hardest hit areas.

Andrew
By Andrew at 9:12 AM No comments: Links to this post 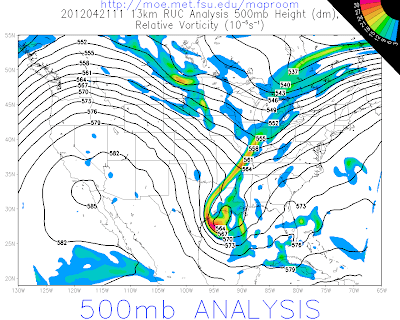 A strong storm system is currently in the Gulf of Mexico making its way east, where showers and storms can be expected across the Northeast, but also some intense snow. Cities like Buffalo, NY could get in on more than a foot of heavy, wet snow.
Currently, the vort max (darkest red) is just east of Texas, which is where we will place the center of the storm. There is a vort lobe (elongated region of low pressures) running northeast into the west Ohio Valley areas, which is bringing down morning temperatures in those areas.

This is the probability for 8 inches of snow 2 days from today. As you can see, the highest potential is centered over far west New York, where I am expecting likely amounts at 8 inches, with isolated totals at a foot or potentially higher. This snow will be heavy. There's no getting around it. I advise anyone living in the area marked off above to prepare for downed trees and power lines, as leaves are returning to the trees, which will hold snow and thus weigh the tree down more than it would in winter.

Then there's the rain. People along the coast itself may receive well over 3 inches of rain in the next 5 days if this graphic verifies. Because the system will be so strong and because it will shift inland, expect Maine, Vermont, and states in that region to get the most precipitation out of this system. Flooding is definitely a concern, but this will help to bust the ongoing drought currently in the Northeast.
By Andrew at 7:48 AM 9 comments: Links to this post