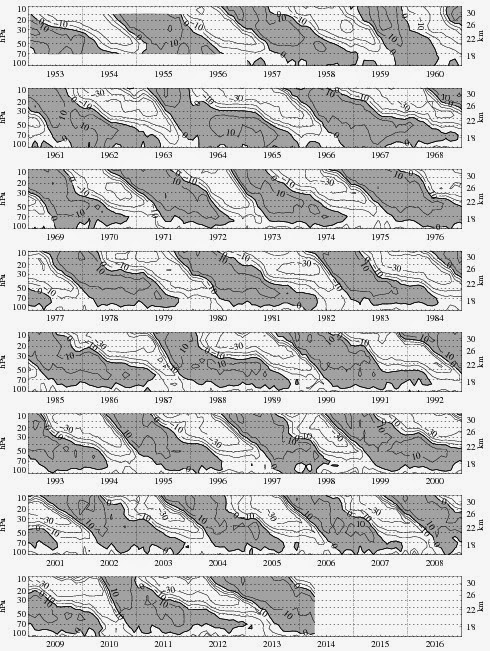 It does look like the positive phase of the Quasi-Biennial Oscillation is ending as we progress into summer, a move that may herald a cooler than normal upcoming winter. The Quasi-Biennial Oscillation (QBO) is an oscillation measured by the direction and intensity of winds in the middle of the stratosphere, usually around the 30 millibar level. When the QBO is in its positive phase, winds are called 'westerly', as they flow from west to east at an anomalously high speed. The positive QBO typically strengthens the polar vortex, thus resulting in a warmer than normal winter for lower latitudes. The negative QBO is when winds at the 30mb level are 'easterly', or going from east to west. Since this is the opposite direction as typical low pressure circulation in the Northern Hemisphere, the polar vortex is weakened, and cold weather tends to permeate the lower latitudes more frequently in the winter. Going by this, it would be plausible to associate this weakening +QBO with what could be a destabilized polar vortex next winter. This may mean additional opportunities for the polar vortex and associated cold weather air masses to penetrate deep into the United States, as they did last winter.

I discussed how my analogs for the upcoming winter showed upper latitude blocking, a feature that would be enhanced with the presence of a neutral, or more likely weak negative QBO phase. At this point, it is too early to tell whether we will be in a definitively negative QBO or a neutral QBO next winter, but the general concept of the weakening +QBO is clear, and this could be another element to a chilly winter ahead.

Andrew
By Andrew at 7:56 PM 5 comments: Links to this post