We continue to see the potential for a significant winter storm somewhere in the East US between December 25-28. Let's see what the models are saying today.

I've decided today will be dedicated to the ensembles, because I just don't trust the operational models this far out to handle a storm like this on their own. As we saw with the Dec. 19-22 blizzard, it can take a while before a reliable solution can be developed, so we'll look to the ensembles for the time being. This forecast is for Christmas morning, and we can see our storm system sitting in the Gulf Coast region. The ensembles seem pretty disorganized as far as exact location goes, seeing as there is no defined low pressure area on the image for this body of precipitation.

Moving ahead to the morning of December 27th, we see the ensembles have solidified in a system more confidently, with a low pressure signature now showing up just offshore of New Jersey. We see the rain/snow line hugging the storm as well, a solution that would bring heavy snow to much of the Northeast.

Considering the general neutrality of the North Atlantic Oscillation through this timeframe, with a slight positive PNA, I wouldn't go as far as to completely trust this solution. It will need to be watched, but I'm not totally confident in it.

Moving on to the Canadian GGEM Ensembles, we find our system stationed in the Southwest, producing copious amounts of precipitation on the evening of December 26th. Keep an eye on these timing issues. The GGEM Ensembles appear to be following a track similar to the GFS Ensembles, although they appear to want to pull the storm slightly further north, possibly in response to a weak positive PNA.

The morning of December 28th brings the storm well offshore per the GGEM Ensembles. Some precipitation is reaching the immediate coastal areas as snow, but with the system so far offshore, I would like to disprove that precipitation forecast.

I don't trust the GGEM Ensembles usually due to their base off the GGEM model, but they do seem to agree with the idea of a slight positive PNA having an effect on this system. It will have to be watched.


The ECMWF Ensembles take a totally different track on this system, preferring to have the system start out in southern Tennessee before moving northeast into the Northeast US, not offshore. A sharp cold outbreak then follows the energy. Such a track would likely bring the best snows to the Ohio Valley and central Great Lakes, but because the ECMWF EPS precipitation graphics are so expensive (if the European weather center even produces them), we have no way of knowing.

For those wanting the ECMWF model itself, here's a couple precipitation graphics: 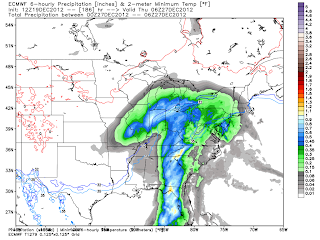 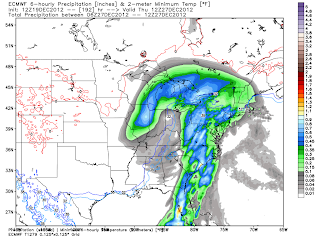 All precipitation above the dark blue line would be snow- and that would be a LOT of snow for the western Great Lakes and Midwest, possibly in excess of 10 inches.

Andrew
By Andrew at 5:14 PM 7 comments: Links to this post

**This post is dedicated to Olivia Engel, age 6, a victim of the Connecticut shootings.** 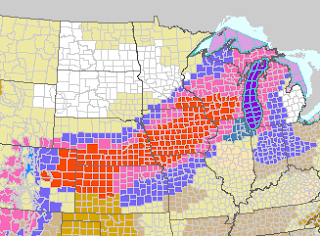 The wide array of winter weather bulletins shows us just how intense this storm system is. We have winter weather advisories in purple, and those stetch from the Front Range in Colorado to central Ohio. Dark blue colors represent Winter Storm Watches, which now only appears valid for the Chicagoland area. Pink implies a Winter Storm Warning, and this is where we will see good accumulations above 6 inches. The reddish shading is the fearsome Blizzard Warning, combining heavy snow and very high winds to make this event a big one, and one worthy of blizzard warnings. 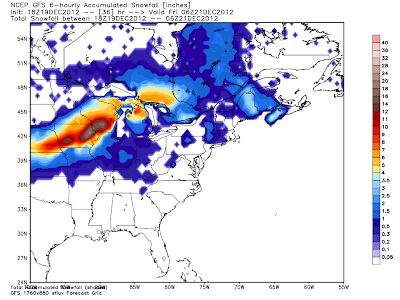 This snowfall forecast fresh off the presses from the 18z GFS shows that accumulations well above 12 inches are likely to fall in southwest Wisconsin and east Illinois as the storm meanders on through. If such a development came true, travel would be paralyzed in cities in this region. Howling winds would not help the snowplow's efforts to keep the roads cleared. 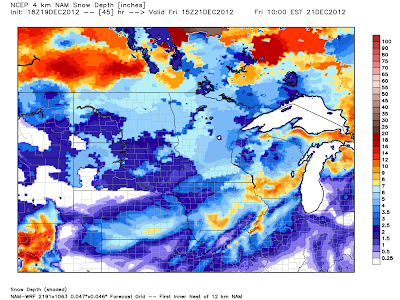 Another, more high resolution graphic from the NAM model shows amounts significantly lower than the GFS is showing. I can't say I have a preference for either based on these single model runs, but if I were to pick one model, I would side with the GFS for its consistency and the definite likelihood of such high snowfall amounts to verify.

Travel will be severely disrupted in many regions across the Midwest, particularly Wisconsin, Iowa, Nebraska and northwest Illinois. Again, very high winds will make travel difficult, and snow days are likely to happen upon these areas, especially Wisconsin and Iowa if the GFS verifies.

More updates as this situation develops.