Major Snows for the Country Not Out of the Question

The pattern is changing. At this point, it's quite obvious. Something people haven't examined closely (including myself), is what this changing means to the weather pattern. In a graphic, here it is.
Using some information we received from former Accuweather Chief Long Range Forecaster Joe Bastardi, combined with some of my own research, it has been determined that this pattern may set up from a positive PNA. Here's the positive PNA. 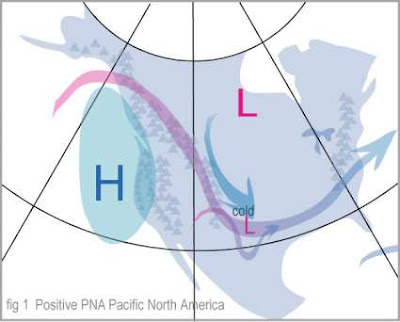 This positive PNA has two factors: the Siberian Express and the Pineapple Express. The first one is the Siberian Express. We can see the area of cold that is present in the Plains and Midwest. This cold air is exported from Siberia into the USA. On the other hand, we have the Pineapple Express- areas of high water vapor that create storm systems that wash ashore the West Coast with potentially devastating flood effects. That is the big arrow you see arcing over the high pressure system. So far this winter, that Pineapple Express has been unable to form, as a major trough in Alaska has prevented it. But now, with the very unstable polar vortex and interfering ridges breaking the polar vortex, we may see this ridge form yet. Now, when these systems come onshore, they are directed sharply southward due to the Siberian Express. Thus, the storms go down south, grab ahold of some Gulf moisture, and produce some big-time snows for the Midwest, Plains and Northeast. All of these elements have to be present for this to work out. Here's the thing though- barely any ensemble members are showing the PNA to go positive. In fact, many show the PNA to go negative. That is bad news for snow lovers.
What these models may not be recognizing is the breaking polar vortex. They may just not realize that this vortex is breaking. It is breaking, and to me,t he chances of the vortex reforming to its past strength is becoming less likely. That unlikelihood is shown by the NAO and AO forecasts, which are forecasted to be going into a negative phase- an indicator of a breaking polar vortex.
All in all, I just don't think these models are handling the PNA or the polar vortex well. Even right now, there is a ridge breaking into the polar vortex. I'm not seeing what is wrong with the forecasts if the observations show the vortex breaking. Models are supposed to take in observations at initialization (the very beginning of the model run). But hey- the models might be completely right about the PNA.
Either way, we know a couple things:
•The Polar Vortex is at least weakening.
•From that, the AO/NAO should begin to trend negative.
•A negative AO/NAO would provide cold and snow.

Sometimes an index can be unfavorable for snow and another one can be favorable, and the favorable index wins out. It's a big educated guessing game- key word educated.
We will have to see. This is a very interesting development, though, and is something that should be watched.
By Andrew at 4:00 PM 18 comments:

Potential Major Snows for the East US on the Horizon? Post at 4:00 PM CST.