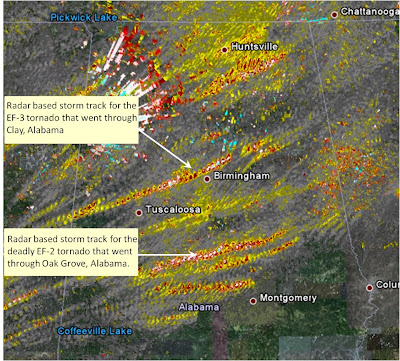 Surveys from the NWS teams indicate that there were at least 2 confirmed tornadoes- one being an EF-3 that ripped through Clay, Alabama, killing a 16 year old female teen, as well as an EF-2 tornado that tore through Oak Grove, Alabama, killing an 82 year old man.
As more surveys are conducted, we will publish more information on these horrible tornadoes.
By Andrew at 7:05 PM 2 comments: 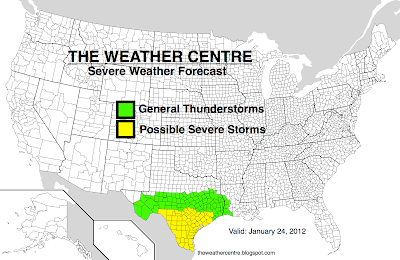 The storm is positively tilted. This means that the storms will not be as strong, as negative tilted troughs involve cold air advocating (moving) over low level warm temperatures. This overrunning cold air makes for more instability, and thus stronger storms. Additionally, a negative tilt means the system has reached maturity, theoretically also reaching maximum strength, and a negative tilt indicates strong wind shear- a crucial element needed for tornadoes.
The biggest risk here should be some gusty winds and small hail. Nothing too significant.
By Andrew at 5:22 PM No comments:

Final Analysis of the January 22, 2012 Tornadoes

A confirmed EF-2 Tornado, with maximum winds of 120 MPH, struck Alligator, Mississippi yesterday.
There was 1 injury, and the tornado path was 3.75 miles long.

Two people were killed by these storms.
•A female 16-year old was killed in these storms. The teen lived in Clay, Alabama.
•An 82 year old man was also killed in Oak Grove, just to the west of Birmingham, Alabama.

At least 100 injuries were reported with the storms.

Jefferson County in Alabama was crushed, with at least 211 homes destroyed and another 218 sustaining major damage.

If you are willing to help the victims of the devastating tornadoes that struck yesterday, you can click here to find your local Red Cross and donate to the victims in Arkansas and Alabama.
By Andrew at 4:09 PM 1 comment:

From our sister blog, the Winter Weather Centre.


There is a potential for a storm in the February 1-2 timeframe, eerily similar in the timeframe to last year's blizzard in Chicago. The storm is even in a very strong stance, much like how strong the blizzard was last year. Considering how the pattern may be close to at least a partial change, I would not dispute the possibility of a storm in this timeframe.
The GFS Ensembles are showing a different story- one that I would trust more considering how bad the models have been this winter.
The GFS Ensembles still have a storm present going in the general same track, but keeps the lower Great Lakes warn throughout the storm event. Again, because the GFS has been so bad this winter I would trust the ensembles right now, but any ensemble or model is still uncertain because this is so long range.
By Andrew at 1:29 PM 43 comments: