This post will address the synoptic atmosphere from May 4th to May 20th.

Current state of the atmosphere is rather bizarre in my opinion, with the United States (henceforth abbreviated as CONUS) under a deep closed low centered in the Plains at this hour. This closed low attains a minimum pressure of over 1000 millibars, although that value is deceiving. Observed temperatures show 60 and 70-degree temperatures being thrown up across the Southeast and Ohio Valley on the eastern side of this storm system as it meanders in the Plains. Further to the north, massive high pressure acts as a barrier to protect Canada from this closed low and bring a stretch of rather quiet weather to the region. Greenland is under a solid storm system, indicating that the North Atlantic Oscillation (NAO) is in its positive (warm weather for the CONUS) phase. A lack of defined height anomalies across the Arctic doesn't help me as far as trying to figure out synoptic temperature trends over the next 48-72 hours. Dynamic situation set up in East Asia, as a strong storm system is going to battle with two ridges of high pressure. Bering Sea is void of any significant height anomalies, complicating the act of figuring out just what the atmosphere wants to do in the aspect of warm or cold temperature trends in coming days. 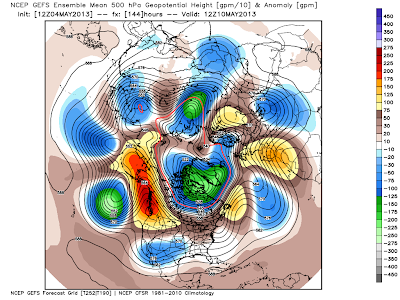 We first look at the short/medium range forecast, with the American GFS ensembles forecasting 500 millibar height anomalies- the same anomalies as the left-hand panel in the top image. This forecast is valid for the morning of May 10th. On this day, we observe a highly meridional flow across the United States. Elongated high pressure extends from the Pacific Northwest along the western Canadian coastline and into Alaska. The ridge, with its full length spanning from the northwest Plains to extreme northeast Russia, acts as a barrier between a strong area of low pressure in the northeast Pacific. This ridge also allows the formation of a Rex Block in the Western US, with high pressure in the Pacific Northwest opposing low pressure in the Southwest and Southern Plains. Common traits of the Rex Block include a relatively zonal flow downstream of the blocking pattern, and this is somewhat evidenced into the central and eastern parts of the nation. Weak high pressure forms a bridge between the Rex Block ridge and moderate high pressure east of the Canadian Maritimes, and this forms the zonal flow east of the Rex Block. Low pressure in the Southern Plains acts to create some disruptive weather across the Gulf Coast states, but nothing significant in the synoptic aspect is anticipated. Around the rest of the Northern Hemisphere, strong low pressure envelops northern Canada into Greenland, symbolizing a positive Arctic Oscillation (AO)- if you recall, the positive AO helps high pressure and warm weather transpire across the contiguous United States. Low pressure extends into Greenland, defining the positive NAO. Rather stormy East Asian region indicates the United States may see some stormy weather after May 16th, although that is to be determined. 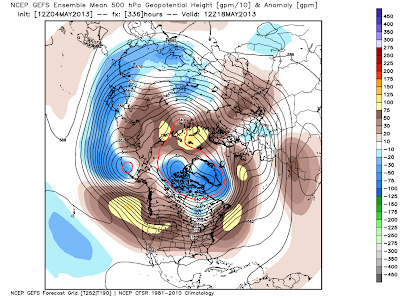 Examination of the long range brings us to the morning of May 18th, using the same ensemble set and same 500mb height anomaly index. General atmospheric flow is much more zonal across the board in the long range, with high pressure dominating the United States and western Canada. Such a zonal flow would certainly allow for at least seasonable temperatures to develop across the nation. I am skeptical of low pressure trying to push south through Canada; I fear that the ensembles are overdoing the zonal flow in the CONUS, and cooler weather may be in store for the Upper Midwest in the long range. Arctic Oscillation remains positive in the long range, and North Atlantic Oscillation follows suit. As we get closer to this date of May 18th, I expect the ensembles to see this highly zonal flow turn more meridional- ensemble sets have a natural tendency to make the atmospheric flow far too calm than what ends up happening.