Cold will Come, Just Be Patient...

There are those thinking that winter is lost because the East remains warm and is projected to for a while onwards. But here's the thing- while we sit in above normal temperatures down in the Lower 48, a positive Arctic Oscillation is literally forcing the cold air to stay up way north in Canada.

The Arctic Oscillation, when in positive, contains a vortex that spins around the Arctic Circle region and bottles up the very cold air. This cold air stays up there until this vortex releases its grip. This releasing is the Arctic Oscillation's negative phase. After the vortex weakens, the brutally cold air squirms its way south and eventually hits the US. 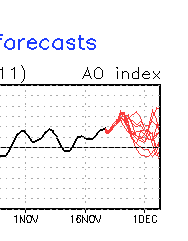 The recent values of the AO have been largely positive. There was a point when the AO blipped negative, but no real effects were felt. Notice how far positive the ensembles take the AO. This means that the vortex would increase in strength, continuing to trap the cold air. Beyond that point, the models struggle. Recent GFS runs have been pointing to a nosedive, but seeing more ensembles provides a bigger possibility of a wider range of options.

There are 2 options at this point in time:

Option A) The AO goes on the GFS trend of a nosedive towards negative territory and goes into negative territory. Cold air bottled up for a long time is released southward, sending a chill throughout the US and possibly some snow. The winter pattern likely gets into gear at some point soon before/after.

Option B) A few ensembles predictions of another positive spike (following the first one in bold red in the image above) validates. Cold air remains situated in the far north, and the US remains mild. Winter is delayed until around Christmas (possibly).

If we had to give a guess into which option would turn out at this time, we actually wouldn't be sure.
The Pacific North American pattern (PNA) is forecasted by 2 major agencies. The NCEP agency is forecasting the PNA to go positive at the time of this nosedive projection, which would be very good for snow lovers in the US. However, the ESRL agency is forecasting a strong negative spike, which would be a 'more of the same' deal in terms of warmth in the US.

Winter should 'start' in the first 2 weeks of December.
By Andrew at 3:48 PM No comments:

We may be making some corrections to our forecast as the models and teleconnections seem lost right now. More info this afternoon.