The new Lezak Recurring Cycle, a repetitive weather pattern that shows itself in the late fall and continues through the winter and spring, is beginning to reveal itself in bits and pieces on model forecasts. 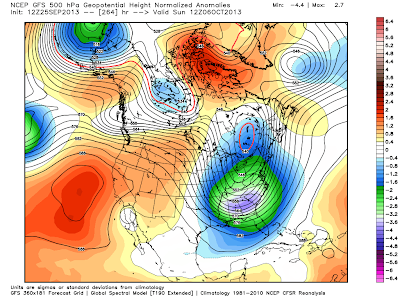 This 500 millibar anomaly chart, valid for October 6, shows a very deep storm system pushing down through the Ohio Valley and Great Lakes into the Southeast. Current model forecasts have this storm system moving relatively close to the East Coast, and if the LRC catches on to this storm system, it's possible this would be a Nor'easter event. But that prospect is laced with 'if's' and other question marks, so I won't emphasize the the idea too much. 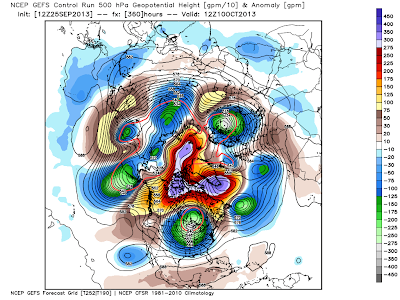 Just ~100 hours later, we see another very deep system across southern Canada and spreading its influence into the Midwest, Great Lakes and upper Plains. That solid red line crossing the border is the freezing line. If we see this system get caught up in the LRC too, don't be surprised to see very cold weather in the Midwest, Plains and southern Canada a few times throughout the winter. Additionally, take note of the stormy Bering Sea and lower heights along the waters west of Baja California. Both of these regions would provide potential storm systems for the United States. Model forecasts not shown on this blog post do portray storm opportunities for the Plains and Midwest due to the lower heights in and around the Bering Sea area. The Baja California energy source could help the potential for big snowstorms in the Great Lakes with the presence of a Southeast Ridge, or the chance of a Nor'easter if the ridge is not present. The last item to check out is extensive blocking high pressure across the upper latitudes. If the Lezak Recurring Cycle catches on to this blocking, don't be surprised to see colder weather for the winter. But again, all of this is educated speculation at this point. 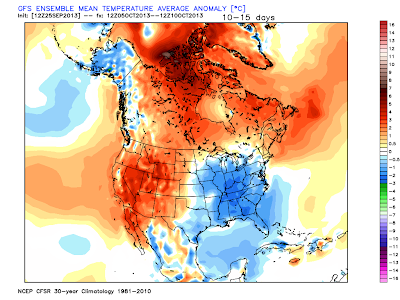 Temperature anomalies for the October 5 through October 10 timeframe show cold conditions across the Central and East US. Again, this may come up again later in the winter if the LRC follows up on this colder than normal pattern. One thing I am concerned about is the spread of warmer than normal temperatures across Canada. Going into the fall, this could limit the cold air available to the US later in the winter season. However, it's only late September, and things could do a turn-around before we hit late fall and winter. Only time will tell.

Andrew
By Andrew at 5:37 PM 3 comments: Links to this post