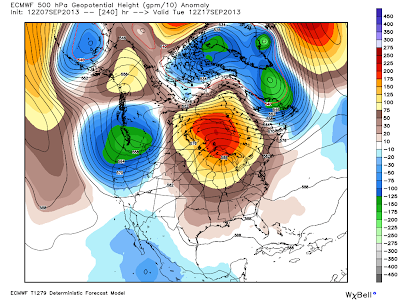 This is the first Long Range Lookout for the 2013-2014 fall, winter and early spring season. These posts will be issued each Wednesday afternoon, and if information arises that has a substantial effect on the long range, a special edition of the Long Range Lookout may be issued on the same day. 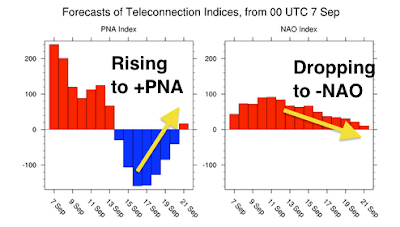 I expect this ridging pattern across south Canada and the Great Lakes to end roughly 3-5 days after it starts- this should not be a long-term event. The reasoning comes from an expected rising Pacific-North American index (PNA), which would allow for the departure of low pressure from the West, possibly shifting to the East. Remember that the negative PNA involves low pressure in the West and high pressure in the East, with the opposite true in a positive PNA. I have little doubt in my mind that the negative PNA we see in the projected teleconnection chart above is due to the negative height anomalies shown on the European ensembles image at the top of this post. On the right side of this image is the projected North Atlantic Oscillation over the next couple of weeks. The positive NAO pattern will be weakening to a neutral NAO, and could go to a negative NAO by the three week timeframe from today. The negative NAO encourages cooler conditions over the Central and East US, and the positive NAO we will be seeing in the next several days is a reason of why above normal temperatures are expected. The Rex Block pattern will not help matters.

Andrew
By Andrew at 8:38 PM 6 comments: Links to this post

Who Could See an Early Snowfall?

I believe the Upper Midwest, Central and Eastern Great Lakes will encounter an early snowfall for the upcoming fall and winter seasons.

As the chart above shows, I have highlighted much of the Northern Plains, Midwest, Ohio Valley and Northeast for the risk of an early snowfall event. I have put these areas in a 25-50% chance for an early snowfall. The states of Minnesota, Wisconsin, Michigan, northern Ohio, northwest Pennsylvania, New York and portions of the far Northeast will have above a 50% chance for an earlier than normal snowfall event. This comes as a result of what could be a favorable pattern for colder weather to hit the nation as we head into fall. Should a storm system come along in the midst of this cold air, it is very possible that a snow event could come about.

Long range forecasts for the Arctic Oscillation show a definite negative trend for the index as we head through fall and even into early December. The graphic above shows this long range forecast by today's four CFS ensemble member's forecasts for the AO, as well as the forecasts from yesterday's four CFS ensemble members. These eight forecasts average out to a decisively negative phase throughout the fall and into winter. I have little doubt that this forecast will not verify as is shown above, but it is possible we see enhanced chances for a prolonged negative AO pattern. If such a situation were to arise, the risk of an earlier than normal snowfall would rise.