The following regions are under mandatory evacuations:

IN NEW JERSEY:
Islands from Sandy Hook to Cape May
Areas east of Watson's Creek

If you are under a mandatory evacuation order, LEAVE AS SOON AS POSSIBLE! This is a serious situation at hand and will threaten lives and property.

The following states are under a state of emergency:

If you are under a state of emergency, you are advised to prepare for a property-threatening and life-threatening event. This is SERIOUS!! Monitor all information given by your local and statewide authorities.

Andrew
By Andrew at 5:54 PM No comments:

Hurricane Sandy is heading for the East Coast in an event what will likely be one for the record books.

Model track guidance and intensity guidance indicate fluctuating strength in the future and a well-built consensus that landfall could occur just south of the southern New Jersey border.

Sandy is fluctuating in strength at this hour as she moves generally north towards the Mid Atlantic. As Sandy moves north, she will be sucked in to another storm system emerging from the Midwest. As these two combine, a situation scarily similar to the 1991 Perfect Storm will emerge.

The combined storms will then move onshore in a feat accomplished by a very small percentage of storms.

This is it. If you live along the New Jersey/New York/Delmarva coastal regions, you need to prepare for a real threat to life and property. This isn't your usual system- this will be much worse.

Next week, I'll have an article out examining the potential for this storm to be included in the Lezak Recurring Cycle (LRC). 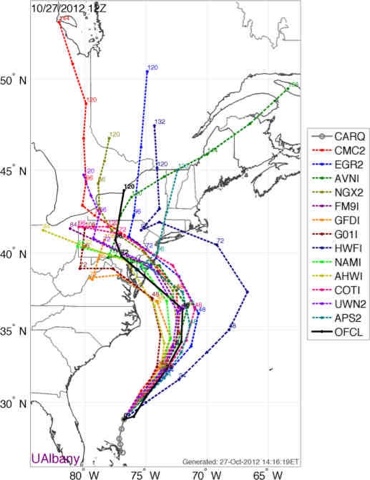 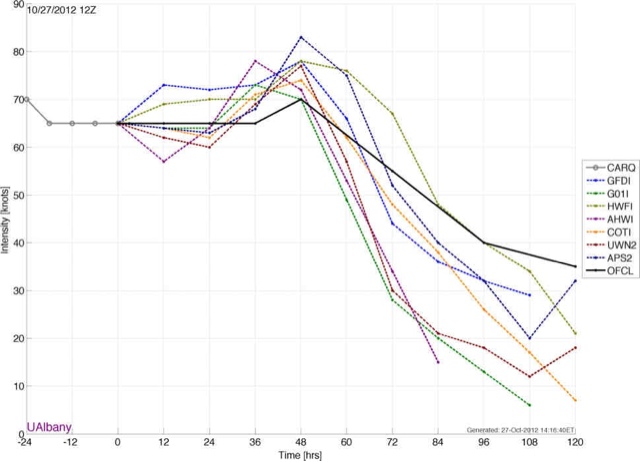