We appear to be facing the season's first severe weather outbreak on April 9th and 10th. 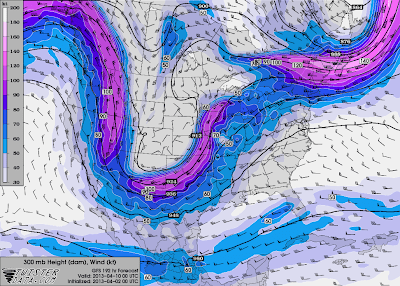 Model guidance indicates a strong storm system will eject out of the Southwest and into the Southern Plains to start off the second week of April. As it does so, a band of strong winds in the jet stream (pictured above) will shoot northeast on the east flank of the storm system. It is these upper level winds that will aid in what I am predicting to be the season's first severe weather outbreak. I anticipate the upper level wind field to exceed 100 knots, as the forecast graphic above shows. For future reference, this and all forthcoming graphics are valid the evening of April 9th. With the upper level wind support, we have one of many pieces to the puzzle of making a severe weather event. 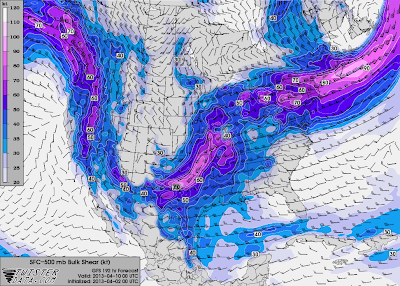 We now continue on to something called Deep Layer Shear, or DLS. As you know, shearing is one of the necessary ingredients for tornado formation, and also for severe thunderstorm formation. The higher the shearing, the stronger the storms. Looking at the layout on the forecast image, we see the highest shearing extending from central Texas into Missouri and even into Iowa. The highest shearing appears to be along a forthcoming cold front that will kick the nation's first round of springtime temperatures out. With springtime temperatures present when the cold front comes through, the cold front should react like a springtime cold front- strong and possibly severe. With the highest shearing centered to the south, the largest tornado threat would be confined to the Southern Plains at this time. 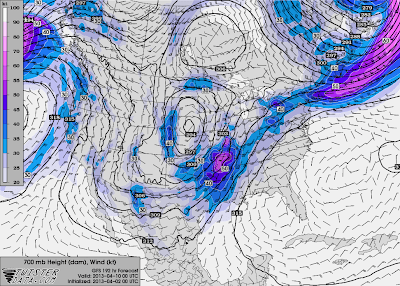 Continuing to work our way down the atmosphere, we arrive at the 700 millibar layer, best known for the layer which holds the nocturnal lower level jet stream, or LLJ. The lower level jet stream is just what the name says- a smaller, weaker jet stream at a lower level of the atmosphere. Looking at the chart above, we see our storm system shown in Nebraska. We can identify that the storm is roughly in that region, as the pressure contours begin to close off and center themselves, indicating the presence of lower pressure and thus our storm system. The wind field is rather quiet around the north and western sides of the storm system, but it is the southeastern flank of the system where we find high wind speeds. A glance at the legend on the left tells us we are dealing with winds above 55 knots. As a rule of thumb, when you have high lower level winds and high upper level winds, the chance of severe weather is greatly increased. Of course, other atmospheric factors have to be present to provide for the severe weather, but a solid wind field certainly helps. These high lower level winds are most prevalent in Arkansas, north of the Gulf Coast. I want you to take note of the location of those lower level winds, as we will discuss it a bit later on in this post. 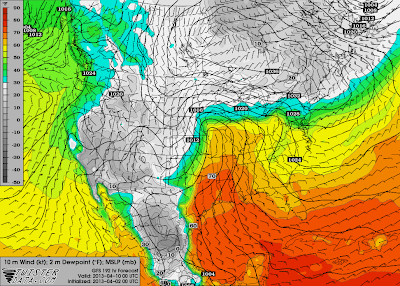 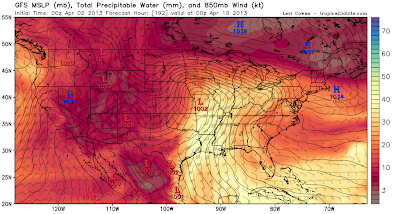 We now arrive at the surface. On the top are predicted dewpoint values for the evening of April 9th, and on the bottom are precipitable water values in colors, high and low pressure system denotations in their respective letters, and 850 millibar wind forecasts in the light gray wind barbs. The general idea of these two charts is clear; we are dealing with the availability of moisture. I pull these two up together, as they are closely intertwined and both are required for severe weather production. Basic meteorology states higher dewpoints means higher moisture. In the same sense, higher precipitable water (PWAT) values indicate higher humidity (you may have heard your TV weatherperson say that there is the equivalent of 1.3 inches of water in the air on a humid day- that is precipitable water). There are a few things we can draw from these two images. The first is that this storm system, wherever it ends up, will have the Gulf of Mexico open to draw loads of moisture north to provide a moist base for severe weather. This is clearly reflected in the high dewpoints and PWAT values across the Plains and southern Midwest. One other thing we can deduce from the second image in particular is how strong the lower level wind field will be. We already discussed the lower level jet stream, but these wind barbs are for the 850 millibar level. You may recall the 850 millibar level is 5,000 feet above ground, while the 700 millibar level is 10,000 feet above ground. As far as finding out what wind speeds those wind barbs are predicting, each long line is 10 knots, each shorter line is 5 knots, and each triangle is 50 knots. For example, we can see a few triangle wind barbs in Louisiana, Arkansas, Texas and Oklahoma. Not only does that mean 50 knot wind speeds just 5000 feet above ground (AG), it also means a very windy day here at the surface if this forecast were to verify.

So we've figured out that the models are pretty excited about this event- they've been showing it (albeit not extremely consistently) for multiple forecast runs now. But is it possible we could get some clues from the past on where this severe weather event may go?

The answer is yes. 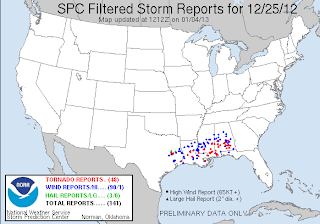 If you think back to Christmas Day 2012, there was a severe weather outbreak that spanned much of the Gulf Coast. The event began in Texas with a tornado reported in Houston, continuing and strengthening on east through Louisiana, Alabama and Mississippi. A very wild day as most of the severe weather reports were tornadoes and damaging winds, as the archived Storm Prediction Center report chart shows on the bottom image. The top image illustrates the 500 millibar overview on the evening of Christmas Day. The storm system was plowing through the Gulf Coast, with the severe weather out in front.

Many of you know me as an advocate of the repeating pattern of the Lezak Recurring Cycle (LRC). This year's cycle length is approximately 53 days long, and if we count back two cycles (106 days), we arrive a within a day or two of Christmas Day. What does this mean? This means that this upcoming severe weather event could be happening in the same pattern that the Christmas Day severe weather outbreak occurred. Ergo, this upcoming severe weather potential could echo the Christmas Day event (not specifically in strength, but in overall pattern). One thing that should be noted is that the April 9-10 storm looks to be further north than the Christmas Day storm. This would mean the severe weather should then be further north as well. It's too early to name states and areas that could be affected, but my faith in this event's potential is growing by the day.

*Note- the connection to the LRC was made by the members of the AccuWeather Forums.
By Andrew at 4:00 PM 2 comments: