Spring Comes to a Crashing Halt

Medium range guidance has been very enthusiastic with blocking high pressure formation over the upper latitudes. The European model, on the left, and American model, shown on the right, are both forecasting strong high pressure formation and sustainment over the next 8-10 days. This high pressure will dominate the Arctic and result in an incredibly negative Arctic Oscillation. When the Arctic Oscillation goes negative, one can expect an increased chance of cold weather in the US. However, with this strong of blocking high pressure resulting in a potentially-record breaking negative AO, cold weather will certainly hold its ground against any springtime intrusions. The high pressure over the Arctic will act to suppress storm systems as well, meaning the Plains may see their snow machine close up shop, while the Eastern Seaboard may need to stock up on salt and shovels. 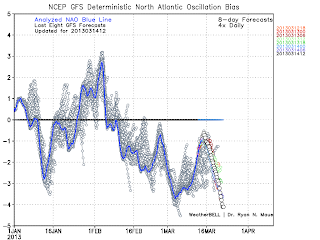 The latest forecast for the North Atlantic Oscillation (NAO) is also plummeting in coordination with the predicted presence of overwhelming high pressure in the Arctic. If we take another look at the first image, we see high pressure extends into Greenland. This creates an increased instance of cold weather outbreaks into portions of the Northern US (mainly the Northeast and Great Lakes), as well as a suppression of the storm track and enhancement of the subtropical jet stream (STJ). If the STJ is enhanced and the storm track is suppressed, the potential for Nor'easters drastically rises. This is why Northeast winter weather lovers tend to get excited when the negative NAO comes around. This strong negative NAO, combined with suppression provided by the negative AO means portions of the North US may be entirely shut off from any formidable snow event for a while, possibly until next winter.

(Non weather-geek summary:) In all, I am definitely seeing a colder pattern in store for the next few weeks. The abundant high pressure over the Arctic Circle extending into Greenland is a good sign for a sustained presence of cold air, but the largely-undisturbed jet stream means this cold air will not be as intense as a winter month like January. The big storm threats are definitely going to reside along the South Plains and Gulf Coast for severe weather, as well as the Eastern Seaboard for snowfall.

(Weather Geek summary:) Atmospheric indices around the globe suggest the world pattern is also gearing up for a chillier tone. Negative Earth AAM combined with GWO moving into Stage 4 suggest the subtropical jet stream will indeed be enhanced in the presence of this shifting pattern. Very deep -AO and -NAO tell me a rather chilly regime is probable across portions of the North US. Zonal flow will keep the cold in check and hold the coldest air at bay. Snowstorm threats will reside in the Eastern Seaboard in cooperation with the -NAO and GWO. Hesitant WPO/EPO combo means this cold outbreak will not be one for the books, nor may it even be called an outbreak. 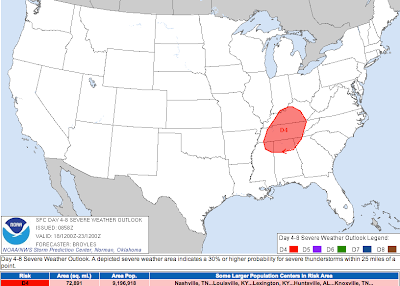 There is a risk of severe weather on Monday, March 18 over central Kentucky, central Tennessee, northeast Mississippi, north Alabama, and extreme northwest Georgia.

Discussion: The Storm Prediction Center has outlined a long range area of severe weather over the aforementioned areas. Short range model guidance shows a thunderstorm complex developing over these areas in the early morning hours of Monday. Current predictions indicate this complex will develop as a non-severe event in far eastern KY/TN, and then blossom into a rather large complex, mainly confined to Kentucky and Tennessee. Forecasts in the instability department are rather unenthusiastic with this event, bringing minimal instability into these regions. Additionally, cloud bases do not look to be low enough to produce an efficient tornado threat. It appears that the main threat will be provoked and sustained by moderately strong lower level winds and modest shear. Not looking like a major event in this case according to the most recent model guidance. 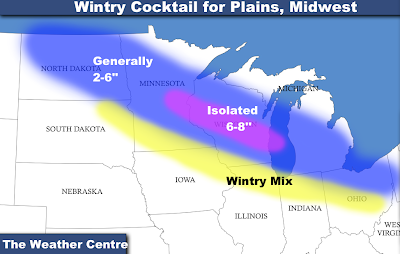 A wintry cocktail will be taking over the Plains and Midwest this weekend, with accumulating snows and rain only part of the puzzle.

In my forecast above, I predict a general 2-6'' of snowfall from North Dakota into northern Ohio. This comes as a clipper system enters the region. As the clipper moves towards the Great Lakes, high resolution model forecasts show an isolated swath of 6-8 inches in Wisconsin and eastern Minnesota. A wintry mix of rain and snow will develop across the Midwest and portions of the Plains. The system will continue to progress eastward and drop more accumulating snow further out into the Northeast. This does not look to be a huge freezing rain event for many, although spots of accumulating freezing rain (maybe a tenth of an inch) as well as ice pellets could make travel difficult.