The prospects of an early winter arriving in the United States are rising, as model guidance and observed temperatures in the Arctic support a quick start to the season. 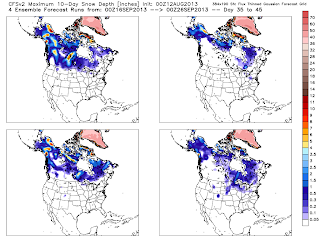 Model guidance is projecting snow cover to begin building over Canada in just several days, and intensifying towards the US/Canada border by the final days of September. Three of the four CFS ensemble members project snow cover extending across much of Canada by the end of September, but all four members are in agreement that snow cover will be building across Canada in just a week or two, and beginning its advance towards the United States by September 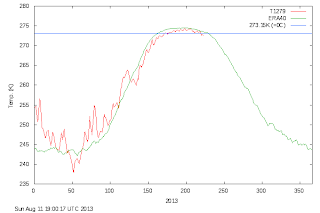 Aiding in prospects for an early winter is the continued observance of below normal temperatures in the high Arctic region. As the graph shows, observed temperatures have been strikingly below normal for several months now, and have recently dropped below the freezing level. If below freezing temperatures can be maintained, and the general below-normal temperature trend holds going through fall, I do not see why scenarios like an early snow pack building over Canada and Siberia are unfounded, and thus the idea of an early start to winter over the US is brought to light.

Just because this winter may start rather early does not mean the winter as a whole will be intense; recall the October snowstorm that hammered the Northeast just a couple of years ago, but then saw the rest of winter with below normal snow and above normal temperatures. 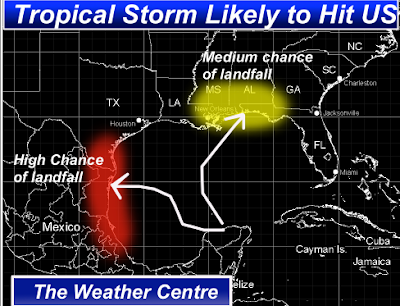 It now appears that a tropical cyclone (most likely of tropical storm status) will make landfall on the United States. Among the threatened areas are Mississippi, Alabama, and Texas. Mexico is also bearing some threat of this cyclone making landfall in that country.

At this moment, it appears we will see development of this cyclone occur just north of the Yucatan Peninsula. All model guidance that is portraying TC formation does indicate it would begin in that region. From there, model guidance diverges into two clear paths: one takes the cyclone and hits Mexico or southern Texas, while the other path allows the cyclone to travel north and hit Mississippi/Alabama, and possibly a bit of Louisiana. I outlined the TX/MX landfall idea as the more likely one, mainly because of what happened recently over in Asia with Typhoon Utor. There is a theory that if a typhoon in the west Pacific does not curve away from land before landfall, a tropical cyclone in the Atlantic will also refrain from making a curve north, thus enhancing landfall potential. Since Utor did not make a curve north before hitting Asia, I anticipate we will not see a strong curve/shift north like the GFS is showing. Rather, the CMC may have the correct idea of a more west/WNW direction with this cyclone. It should be noted that model guidance is leaning towards the MS/AL landfall more than the TX/MX landfall idea, so please keep an open mind on both solutions; better to be safe than sorry.

Regardless of what happens, it is clear there is a substantial threat to life and property, as is with any tropical cyclone. I personally advise all those living along the coast of the Gulf of Mexico keep a sharp eye on this situation, but heed government notices first and foremost on this landfall threat if any are issued.

Andrew
By Andrew at 12:49 PM No comments: Links to this post