Today's 12z and 18z GFS model runs show two things around the 216-hour time frame: A Midwest squall line (with heavy rains) and a disturbance moving off the coast of Africa.
Here's the 12z image, followed by the 18z image. 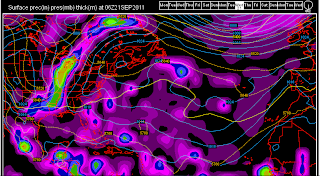 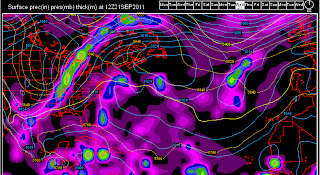 The 12z GFS is more trustworthy, as it takes in data documented by instruments sent up in the air that same day. The 18z and 6z runs don't have that gift, but the 0z and 12z runs of all models have that special backing that builds their evidence a little stronger.
The bad things about that, though, is the 12z image shows the squall line with heavier rains moving slower eastward, while the disturbance off Africa moves a bit faster than the 18z and appears to be slightly bigger.
By Andrew at 5:54 PM No comments: Links to this post

The Medium-Range Ensemble Forecast members of the GFS indicate a frigid Canadian air mass will move into the Plains around September 15. Below is the GFS forecast.

Every forecast member shows a significant drop in temperatures coming in this week. The question is, where is this air mass now?

The circled region shows where the air mass is now. A sharp cold front will collapse into the country, with Canadian high pressure releasing frigid air as it drops down behind the front. Here's a projection of Thursday night's lows over the Plains. 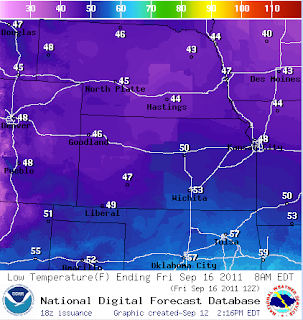 By Andrew at 3:34 PM No comments: Links to this post

Email ThisBlogThis!Share to TwitterShare to FacebookShare to Pinterest
TS Maria will go outto sea, TS Nate has made landfall and dissipated over Mexico last night.
By Andrew at 10:56 AM No comments: Links to this post