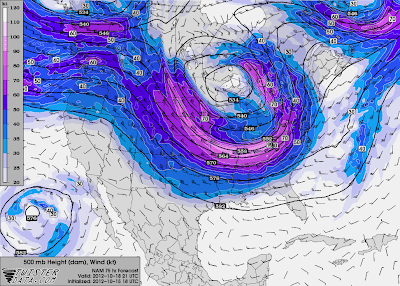 A powerful storm system will enter the nation, making much of the eastern US a wet, windy mess for the second half of this workweek.

This is the forecast from the North American Mesoscale model, or the NAM model for Thursday. It is forecasting 500mb height wind speeds, where one can most easily see systems of high pressure and low pressure. The above image shows a very powerful storm system striking the Upper Midwest and creating quite a windy environment in the upper atmosphere.

The model is showing very windy conditions prevailing over the northern Plains and into the Midwest, as scattered showers roam around the same regions. I would not be surprised to see some flakes mixing into the northern Plains precipitation. There will be some thunderstorms, possibly severe in the southern Plains. A squall line with varying strength will be sliding from border to border across the eastern US. The worst weather is likely to be in the south near the Gulf Coast, while heavy rain and rumbles of thunder are likely farther north.

Grab those hats and heavy jackets, it's going to be a windy end to your workweek!

Weather Explained: Why Is The Radar Is Always Green At Night? 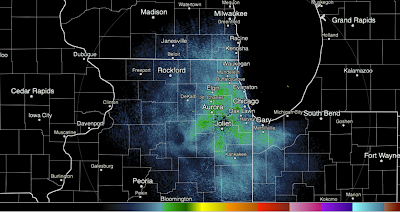 If you look at the radar on a calm night, you might think that it's raining. But, upon a look outside, you see no clouds. But the radar is showing color everywhere, as pictured above. What is going on?

During the day, air rises as the sun heats the atmosphere. Whether a storm is coming or going, air is always rising during the day. This rising of the air actually affects the radar. A radar works by sending out a wave in all directions. This 'wave' then bounces off any clouds and back to the radar, telling the radar that it caught something. This 'catch' by the radar wave is how we see storms on the radar.

At night, the radar is still working, sending out beams in all directions. However, at night, air sinks if high pressure is in the area. This sinking of the air will take the radar 'waves' and actually push them to the ground. When they are pushed down, they hit houses, trees, anything and everything on the ground. This gives the radar a false idea that there is something in the area, hence the colorful display like the one above.

So when you're having an outdoor party and check the radar to see something like the above but see a clear sky, it's the radar beams hitting the ground thanks to sinking air.

Arctic Floodgates To Open Next Week 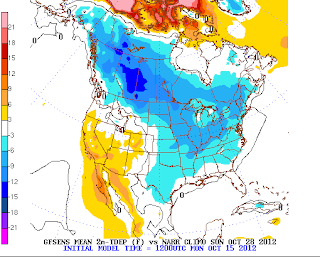 The GFS Ensembles are predicting that a massive pool of frigid air previously building up over western Canada will be unleashed on the entire nation, with many areas plummeting to temperatures as low as 12 degrees below normal.

It is not uncommon for temperature swings to be common in the Fall, when summer is transitioning to winter. However, this looks to be the first widespread chill of the late fall season. After many areas have had their first hard freeze, this event could bring devastation to plants unprepared for such cold temperatures.

Let's remind ourselves that the above image is an average of the GFS Ensembles. But what is the GFS itself saying?

The GFS extends this cold outbreak well beyond 7 days, with temperatures being projected to be downright cold in the northern Plains, with the chill extended well east into the East Coast and into the Atlantic.

While we have already had to get out our heavy jackets this season, make sure you are prepared: This wil be the first of many cold snaps across the nation, not just in one region. Get those plants prepared for next week. I wouldn't be surprised to see flakes fly in the Plains if this forecast verifies.

Andrew
By Andrew at 6:53 PM No comments: Links to this post

What Are The Models Saying This Winter?

Meteorologists have uncovered dozens of indices that can be forecasted on a short term basis, with several being predicted on a long range time frame. However, there are models that forecast the *long* range, and they are not to be discounted. Let's take a look. 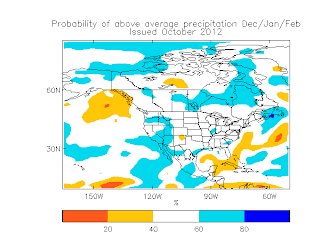 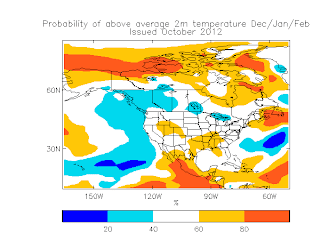 The two images above are the probability of above or below normal precipitation (top image), and above or below normal temperature anomalies (bottom image), valid for December-February 2012-2013. The UKMET is known to be pretty close with the ECMWF, as they are both from Europe, but verification is another matter.

Either way, each model has its say, so let's take a dive into the UKMET. The model is saying that the Plains states and some residents in the Rockies may get in on slightly above normal temperatures come winter. This anomaly is reflected into the Ohio Valley and much of the Gulf Coast. The upper Great Lakes and areas of the Northern Plains end up below normal in the temperature department. For precipitation, the West Coast and Ohio Valley find themselves in a wet situation, with spots of the South also getting in on the fun. However, dry weather is forecasted for scattered regions along the eastern Rockies.

The Japanese, known for their infamous JMA model, have a long range model as well. This is based off the JMA model, but before you discount it, remember that each opinion is valid, much like Freedom of Speech.

The JMA prefers a chilly situation across much of the western 2/3rds of the nation in the bottom image, with warmer temperatures across the East Coast. Precipitation is below normal in the same western 2/3rds and above normal in the Eastern US. This looks like a fairly valid solution- the Equatorial Pacific is fairly neutral across the board, and below normal precipitation anomalies in the northeast Pacific indicate a ridge in place, which the JMA seems to be handling correctly as far as effects on the US.

These are just a few of the long range models people are looking at for this winter. There are many more that are out there, some of which you can find on our famous Weather Models page.

Andrew
By Andrew at 6:40 PM 4 comments: Links to this post