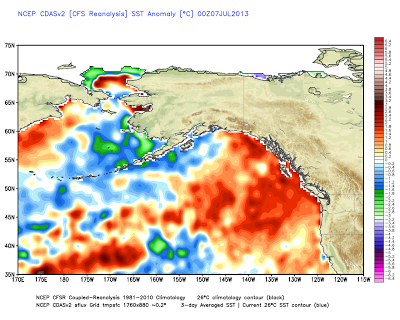 The Pacific Decadal Oscillation (PDO), a major driver of weather patterns, especially in the winter, has turned positive recently.

The PDO has two phases: positive and negative. In the positive phase, above normal sea surface temperatures preside over the waters immediately offshore the coastline from Alaska down to the Pacific Northwest. In the open northern Pacific waters, a body of below normal sea surface temperatures are observed. It can be thought of as warm water along the coastline surrounding the colder waters in the open northern Pacific. In the negative phase, it's exactly the opposite. Cooler waters are dispatched along the coastline from Anchorage to Seattle, and warmer than normal waters cover much of the northern Pacific.

Until recently, we have been in a negative PDO phase. This meant that precipitation trends during the winter were very dry along most of the Southern US, including the Gulf Coast states. This dry trend continued into the Mid-Atlantic, before very slight above normal precipitation anomalies were favored in the Great Lakes region. The negative PDO tends to favor a very wet West Coast. In the temperature department, a negative phased PDO meant nearly everyone in the nation experienced increased chances above normal temperatures (outside of the Northern Plains, which was favored to experience below normal temperatures).

Now that we are entering into a positive PDO that looks like it won't be going away anytime in the next several weeks, let's see what the positive PDO composites for temperature and precipitation look like. 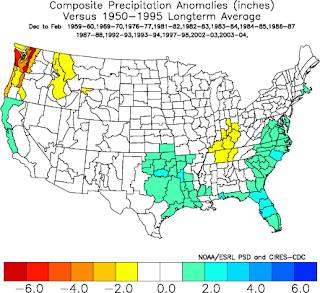 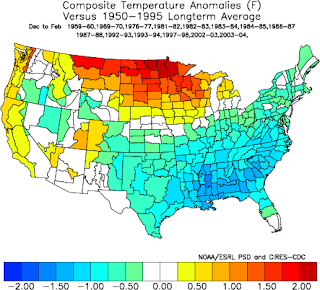 The top image shows precipitation trends in positive PDO years, with the bottom image depicting temperature trends in positive PDO years. For precipitation, the Pacific Northwest joins the southern Ohio Valley in being favored for a drier winter. It is worth noting that those in the Pacific Northwest have much higher chances for drier weather, as the dry anomalies in the southern Ohio Valley are very slight. The Gulf Coast experiences a wetter than normal winter, as does a portion of northern California. Oddly enough, the precipitation composite is very similar to that of the El Nino winter.
In temperatures, much of the southern half of the nation is favored for below normal temperatures in a positive PDO winter. This cool trend stretches from New England into skiing country in Nevada, Utah and Wyoming. The Northern Plains and Upper Midwest are faced with warmer than normal conditions in a positive PDO.

Remember, the Pacific Decadal Oscillation is just one of many factors that go into forecasting in the long range- although this composite may say one precipitation trend is likely, another factor may say the opposite precipitation trend is probable. Don't put all your eggs in one basket; even if you like what the positive PDO typically brings to the US, don't base your whole winter's expectations solely on these two images above.

aNDREW
By Andrew at 4:42 PM 3 comments: Links to this post

Invest 95 will have to overcome some obstacles in order to maintain its strength, but the potential for this system to affect the US in one way or another still exists. 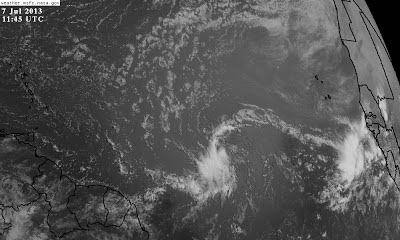 Visible satellite imagery shows Invest 95 as the system in the center of the image. This invest isn't all that special right now; convection associated with the system isn't too rambunctious, and no defined circulation has been spotted. Despite the meager visible diagnosis, indications are that winds were previously around the 30-40 MPH range, which could have made a case for calling this system a tropical depression. At this point, though, I don't believe that Invest 95 is active enough to hold the title of tropical depression.

The latest model guidance suite for Invest 95 seems to have cleaned up a few parts of the forecast and made a general consensus for roughly the next 3-4 days. The general idea is that Invest 95 will most likely move west-northwestward and approach the Dominican Republic in coming days. I am a bit skeptical of the models that take this invest south of the D.R. and Haiti, as it appears the GFS model has been taking this system too far west in nearly all of its last several model runs. For that reason, it appears to be rather likely that this invest will most likely not get too deep into the Gulf of Mexico, if it even goes into that body of water at all. The preferred forecast is to have the invest keep in a track that would scrape the northern coasts of Haiti/D.R. and Cuba- beyond that point, model uncertainty ends the consensus.

Before this invest can even think about affecting land, it will have to jump through a few hoops along the way. The image above shows the quality of air in the waters to the west of northern Africa. As the legend shows, the presence of more reds and pinks indicates drier air, while yellows or the absence of any color depicts less dry air is in the area. Invest 95 is shown in the bottom left-ish corner of this image, just east of the hook formation of dry air. That little arm of dry air will be going at Invest 95 for enough time that the already-unimpressive convection associated with the system will be beaten down further. I do expect the invest to survive this initial beating of dry air, but as a consequence of pulling through that dry air mass and then having to fend off pockets of dry air on the way to the Dominican Republic, I am not expecting Invest 95 to reach hurricane status by the time it begins to affect Hispaniola. Tropical storm status will be tricky to achieve, as pockets of higher wind shear and iffy upper level winds hold down the invest from strengthening too much.

**EDIT: The National Hurricane Center has upgraded the risk of Invest 95 developing into a tropical cyclone to 60%. Disregard the last sentence of the above paragraph.

I will not make any calls for where Invest 95 could affect the US due to model uncertainty and the question of how strong the invest will be; the track of all tropical cyclones depends on how strong the system is, in addition to other atmospheric factors like upper/lower level winds, etc.

Andrew
By Andrew at 12:38 PM No comments: Links to this post