**This post is dedicated to the 19 firefighters who perished in the Yarnell Hill Fire in Arizona.**

The threat of a tropical cyclone landfalling on the United States is quickly rising for July and August. 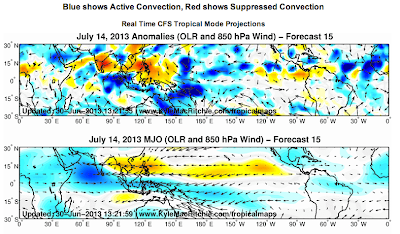 Forecasts from the CFS long range model are shown above in two charts- the Outgoing Longwave Radiation (OLR) and 850mb winds on top, and the OLR/850mb winds associated with the Madden-Julian Oscillation (MJO) on the bottom. Blues indicate areas of stronger tropical convection, while reds and oranges illustrate regions where storms are not as prevalent. Throughout July, it is being stressed that the MJO will want to hang around the waters immediately west and/or immediately east of southern India. The strength of this MJO pulse will vary, but it is likely we will see the enhanced tropical convection focus itself in the vicinity of India. When the enhanced convection is just west of India, as is shown on the second panel of the image above, the MJO is in Phase 1 of its eight phases. Each phase has different effects on the weather in the US, and each phase affects the chances of tropical cyclone formation differently. We'll dive deeper into the latter effect a bit later in this post. 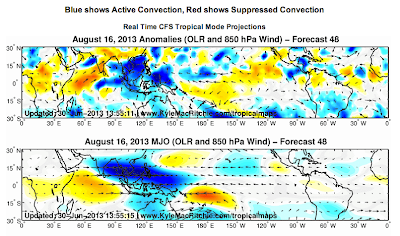 Towards August, we see a change in the forecast. The rules for tropical convection and their associated colors are the same as the first image. In the bottom panel, rather than a small area of somewhat-dark blue colors, we now see a large swath of deep blues extending from India and into Oceania. When the enhanced tropical convection is centered due south of eastern China, this is referred to as Phase 2 or 3 of the eight-phased MJO. This is different from the Phase 1 chart we observed above, as the enhanced tropical convection has shifted further east. I have been worrying about August for intense tropical development in the Atlantic for a few days now, and this long range CFS forecast would seem to confirm my suspicions. 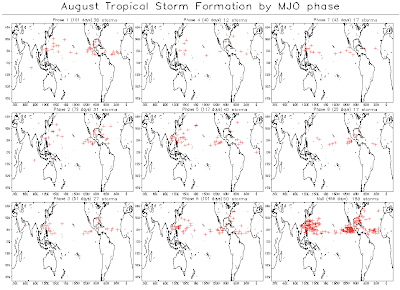 I talked earlier about how each phase of the MJO brings different areas of different potential for tropical cyclone formation. The chart above, from the NCEP, shows recorded tropical storm formation areas by each MJO phase (listed above each panel), as well as development in time periods when the MJO was too weak to be defined by a phase (bottom right panel). I mentioned how a Phase 1 (maybe Phase 2) MJO pattern was looking likely going into July (I know the chart says August, I will distinguish the two months in the following sentences). If we look at the chart above, on the top left panel, we see that development in Phase 1 in August was enhanced in the eastern Atlantic and Gulf of Mexico. The eastern Atlantic appears to have been lit up by tropical waves exiting the African coast, and the Gulf of Mexico tends to both accept a few of these tropical waves and also fire off its own low pressure systems that then develop further. In the July chart, eastern Atlantic is not as enhanced in Phase 1 as it is in August, so keep in mind any development in July would most likely be seen in the western Caribbean/Gulf of Mexico if we abide by a Phase 1 MJO for that month.
For August, I discussed my anticipation of a steady Phase 2 and 3 MJO pulse. Using the chart above to look at the Phase 2 panel (left center) and Phase 3 panel (bottom left), we see that the East Coast tries to attract some tropical attention, especially in Phase 2. The eastern Caribbean also lights up in Phases 2 and 3, but it is the Gulf of Mexico and Western Caribbean that retains its mark as the 'hotspot' for Atlantic development. Towards Phase 3 we see the African tropical wave system start back up, but I'm a little skeptical of its absence in Phase 2. Regardless, it's apparent that Phases 2 and 3 would allow some good chances at tropical development in the Atlantic. 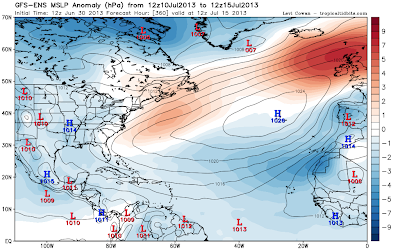 In the long term, the GFS Ensembles are showing a lowering of sea level pressure anomalies off the western coast of Africa and along the 20N latitude line, as well as the raising of anomalies from western Europe into the waters offshore the Eastern Seaboard. This is in response to a large high pressure system across nearly all of the open Atlantic basin. When this kind of set-up appears, any tropical disturbances coming off the coast of Africa tend to be pushed south in a movement that favors entry into the Caribbean, potentially resulting in development in those waters or towards the Gulf of Mexico. While we cannot identify any particular disturbances in the waters between the 20N and 10N latitude lines in the image above, it is apparent that an anomalously low sea level pressure anomaly would indicate that the western coast of Africa may try and set off a few tropical waves during the last couple weeks of July.

The GFS Ensembles also show the normalized spread of sea level pressure between ensemble members, with individual members' high and low pressure areas shown in red (low pressure) or blue (high pressure) below. The abnormally high spread among ensemble members, as well as the presence of low pressure marks in the vicinity of this high spread tells me the ensembles could be hinting at the presence of a tropical wave for the middle of July nearly centered along the 20N latitude line west of Africa. Will this development actually happen? Chances are, regardless of development, this time period will attract some attention. 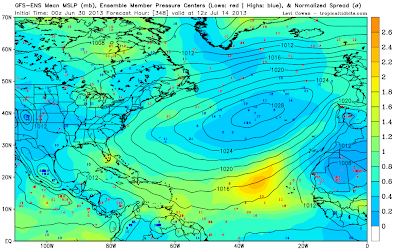