Yesterday, I posted about how the Arctic was experiencing the coldest temperatures for this time period since before 1958, as the image below shows. Now that we've clarified the presence of an anomalous cold trend in the Arctic, what could this mean for long term effects into the fall and early winter? 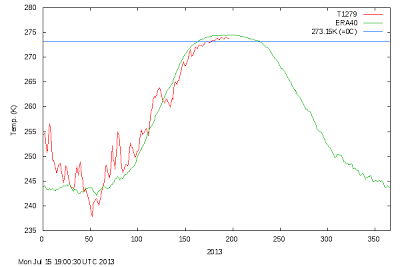 I discussed yesterday how a main effect of these below normal temperatures will be the hampering of Arctic sea ice melt. This means the sea ice extent is most likely going to stay well above the record-breaking low ice we saw last year. What it also means is an increased chance of low pressure formation in and around Greenland, known by many as the positive phase of the North Atlantic Oscillation.

In a study I recently uncovered, it has been detailed that above normal temperatures in the Arctic help lead to exaggerated sea ice. It is this exaggerated loss of sea ice that then leads to the tendency for the negative phase of the North Atlantic Oscillation to develop. The negative NAO involves high pressure formation in or around Greenland that then positions itself over that land mass for a prolonged period of time. In response to the negative NAO, colder air (and rising snow chances in winter) is encouraged to enter the Northeast and East US.

If we begin to see low pressure start to form more often around Greenland entering fall, I would not be surprised to see that the cause of it is this colder than normal Arctic environment. This may pave the way for a fall with generally warmer temperatures and not such a variable flow that would allow for big temperature swings.

Andrew
By Andrew at 5:28 PM No comments: Links to this post